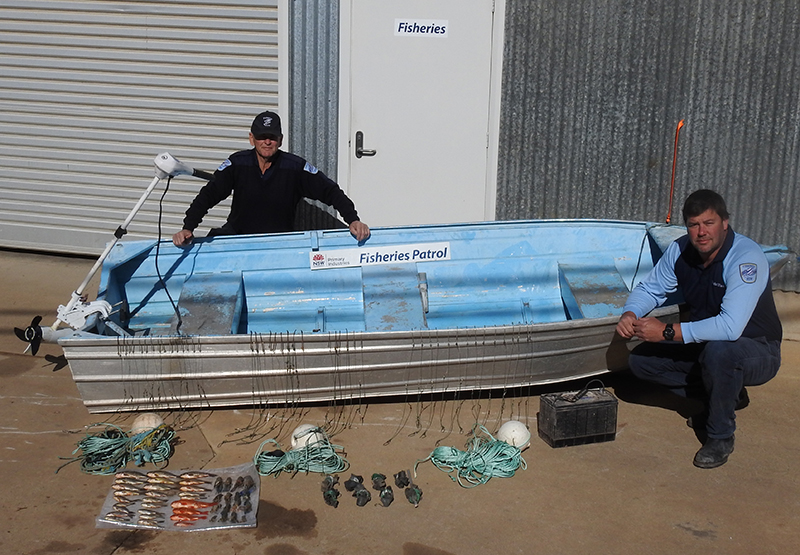 A 60-year-old Walgett man has had his boat seized by fisheries officers after being found illegally fishing in the waters of the Barwon River, NSW Department of Primary Industries (NSWDPI) Director Fisheries Compliance, Patrick Tully, said today.

“It is alleged that each individual cross line had 15 hooks attached and live carp and goldfish were being used as bait which is also illegal.”

The officers then set up a surveillance operation of the illegal gear until the man returned.

“When officers saw the man retrieving the gear they approached and introduced themselves as fisheries officers. The man was found to be in possession of a Murray Cod allegedly taken illegally from one of the cross lines,” Mr Tully said.

“The man allegedly fled the scene only to be apprehended later with the assistance of NSW Police and interviewed at Walgett Police Station.

“Fisheries officers seized the man’s boat, motor, and fishing gear allegedly used to carry out the illegal fishing activity. It will be alleged the man had a total of 53 hooks set in the waters of the Barwon River.”

A brief of evidence is being prepared where a series of offences are being considered, including:

The man potentially faces up to $22,000 or six months imprisonment or both for most of these offences if convicted in Court.

If anyone suspects illegal fishing in NSW, they should report it to the Fishers Watch phone line on 1800 043 536 or via the online Report Illegal Activity Form.