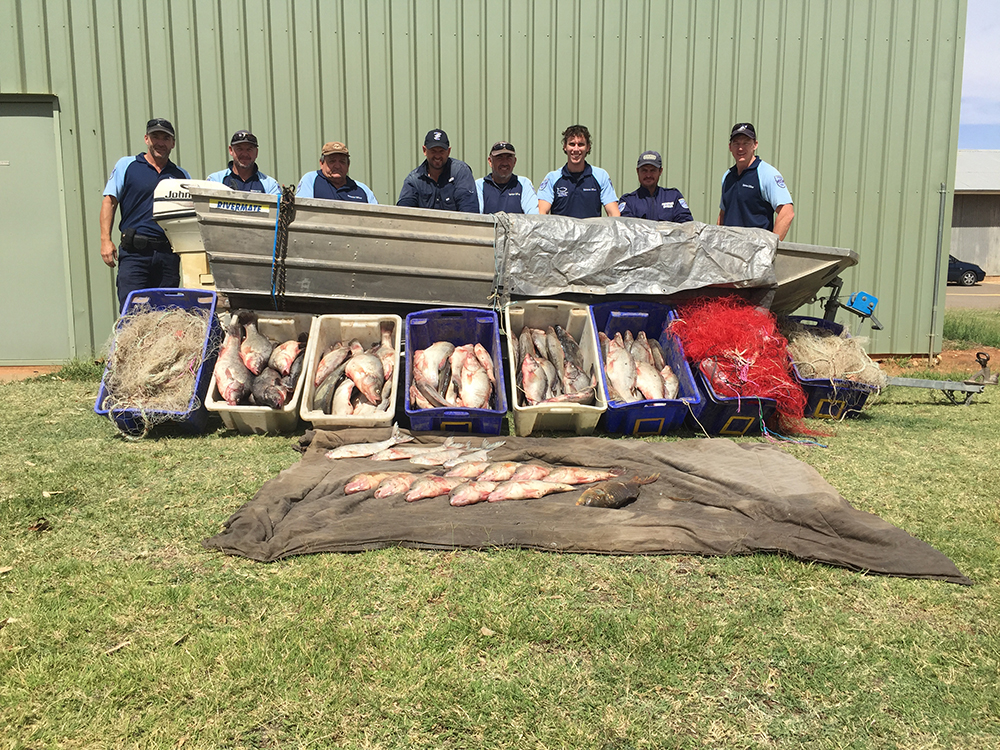 Months of intelligence gathering and high-level collaboration between NSW, Victoria and South Australia has resulted in the apprehension of a 36-year-old Pomona man for allegedly taking and illegally selling 12 tonnes of Golden Perch worth around $200,000.

“The interstate undercover operation was established to investigate the unlawful taking of Golden Perch from NSW and their subsequent sale in Victoria under the guise of having been taken lawfully from South Australian waters,” Mr Tully said.

“On 13 March, 2019, NSW DPI officers pounced near Pomona on the Darling River, seizing the man’s boat, motor and trailer, seven illegal gill nets, a quantity of fish and a mobile phone.

“NSW Fisheries officers from Western NSW and the Statewide Operations & Investigations Group then teamed up with Victorian Fisheries Authority investigators and NSW Police to execute a search warrant at the man’s Pomona address.”

As a result of the search warrant, a further 101 Golden Perch weighing almost 150kg in a cool room on the property, along with a further eight gill nets, fish boxes, styrofoam boxes, scales and documentation were seized. Four firearms and a quantity of ammunition were also seized by NSW Police Force.

Simultaneously, Victorian Fisheries Authority investigators obtained records from a number of businesses in Victoria including a fish wholesaler in Melbourne where it will be alleged the fish were destined to be sold.

The Pomona man has since been formally interviewed by NSW DPI Fisheries and now faces a range of serious charges carrying maximum fines of up to $110,000 and/or 12 months imprisonment, or both.

“Illegal fishing like this is a real kick in the guts for a community already doing it tough because of the drought,” Mr Tully said.

“Our fisheries officers do a great job protecting our native fish stocks and legitimate aquaculture industry so this should send a clear message to anyone considering exploiting this valuable resource for personal gain that it will not be tolerated."

If anyone suspects illegal taking or selling native freshwater finfish in NSW, they should report it to the Fishers Watch phone line on 1800 043 536 or via the online Report Illegal Activity Form.