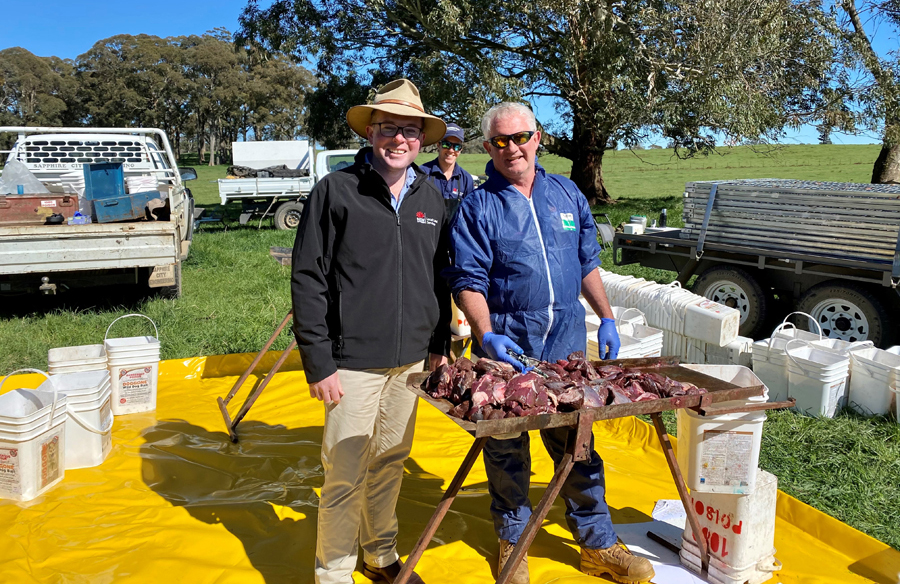 Minister for Agriculture and Member for Northern Tablelands Adam Marshall has overseen the beginning of a behemoth baiting operation which will cover more than 500,000 hectares and almost 480 private land holdings across the northern part of NSW.

Mr Marshall said wild dogs and foxes were a plague on farming operations, especially now as conditions bounce back from drought, and the large-scale aerial distribution of fresh meat baits injected with 1080 would help tackle the destructive issue.

“Never before have we used more baits and longer bait lines in a single Spring operation in this state,” Mr Marshall said.

“Wild dogs cause more than $22 million in damages and lost production in NSW annually, but this program will help mitigate those effects, covering over 500,000 hectares across the Northern Tablelands, from Niangala to the Queensland border.

“The NSW Government is united with landholders on the road to drought recovery, and the last thing they need to worry about is predators preying on spring lambs and calves.”

The Spring Aerial Baiting Program is a co-ordinated operation between NSW Department of Primary Industries (DPI) and the Northern Tablelands Local Land Services (LLS), in association with the Forestry Corporation of NSW and NSW National Parks and Wildlife Service (NPWS).

“In May we ran the largest aerial baiting program anywhere in the southern hemisphere, and while this one isn’t quite as big it will actually cover about 40 more private land holdings,” Mr Marshall said.

“The aim now is to remove survivors of the autumn baiting program, reduce the impacts of wild dog and fox populations on the Northern Tablelands, and allow vulnerable wildlife to repopulate following devastating bushfires.

“1080 is a critical tool in the fight against the destruction that these pests cause for our valuable agricultural industries, the environment and our community.”

NSW DPI and the University of New England will monitor the control zone to record predator numbers before and after the operation, and the data would be used to inform farmers and landholders of strategic pest management decisions.

More information on the control of wild dogs and the critical role of 1080 in protecting our farmers.