Restaurants in Central West NSW caught up in Fishy Business 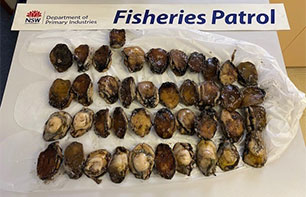 NSW Department of Primary Industries (DPI) Fisheries Officers are conducting inspections to crackdown on the possession and sale of recreationally caught fish.

Fisheries officers in the Northwest of the state have conducted 47 routine inspections over the past few weeks. NSW DPI Director Fisheries Compliance, Dr Moriarty, is reminding recreational fishers and restaurateurs to follow the rules that are set in place or face the consequences.

Dr. Moriarty said the warning follows several seizures from restaurants in Dubbo and the Central West of abalone and Murray Cod.

“In one incident 41 Abalone weighing 2.8 kilograms were seized from a restaurant near Lithgow NSW and a $500 penalty notice was issued,” Dr Moriarty said.

“Abalone are a priority and indictable species under the Fisheries Management Act 1994, and it is illegal for restaurants to buy, sell or possess abalone not legally grown via aquaculture or caught by appropriately licensed commercial fishers.

“In a second matter a restaurant in Dubbo was also found in possession of a 46cm prohibited sized Murray Cod and issued with a penalty notice as well.”

Selling recreationally caught fish is a risk to the resource as well as to public health because it is not subject to the same stringent controls and handling procedures as legitimate commercially harvested fish.

“The Department takes this type of offence very seriously as recreationally caught fish cannot be sold under any circumstances.

“The community is increasingly rejecting all forms of illegal fishing and we thank them for their ongoing support in identifying these illegal operators.”

If anyone suspects illegal activity in NSW, they should report it to the Fisher Watch phone line on 1800 043 536 or via the online Report Illegal Activity Form