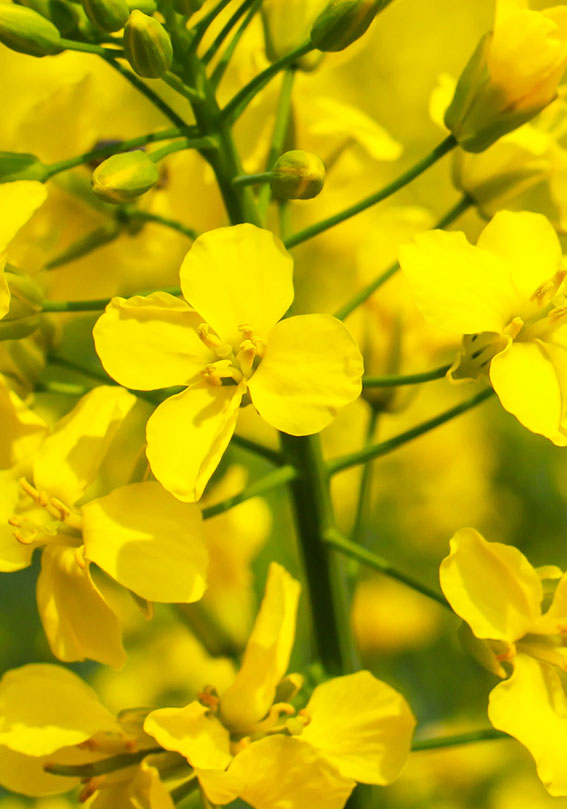 NSW DPI, with research partners, identified multiple canola genes that could be used to develop new varieties with long-term resistance to blackleg disease and global application. The three-year international study detected eight regions with resistance to blackleg on the canola genome across diverse environments in Australia, the UK and France. Blackleg disease is caused by the fungus Leptosphaeria maculans, a devastating pathogen which threatens canola production worldwide. The total area planted to oilseeds fell 64% year-on-year, with canola down 78%. Cottonseed and soybean plantings were down 35% and 32% year-on-year respectively, while sunflower plantings remained steady6.

Ongoing poor seasonal conditions resulted in oilseed production of just 647,000 tonnes, down 68% year-on-year. The canola crop was the smallest since the drought year of 2008–09 in eastern Australia, at just 152,000 tonnes. Yields were affected by the very dry season, causing patchy, late establishment of the crop. Further, large areas of the crop were sprayed out, grazed or cut for silage and hay6, 29

Prices responded to the decreased production, with canola prices at Port Kembla up 13% on average on 2017–18 prices61.

Cottonseed is a by-product of cotton production and is typically used as seed for animal feed or crushed to produce oil for human consumption. However, due to the ongoing drought, the high price of canola for livestock feed has led to the virtual cessation of cottonseed crushing in Australia. As grazier demand placed constant pressure on supply, the economics of crushing seed for oil, meal and hulls were impacted. Growers and ginners tended to sell cottonseed directly to livestock producers, instead of to crushing mills, and the price of uncrushed cottonseed has increased sharply37, 144.

The domestic crush of canola is centred in NSW and Vic, and the closure last year of a main cottonseed crushing plant at Narrabri means canola meal in eastern Australia has met increased demand, boosted by domestic consumption from the stockfeed sector83.

China has also become a key oilseed trading partner. With the EU’s share of exports falling to virtually nil in 2017–18 and 2018–19, China took 57% of total NSW exports, albeit of a significantly reduced volume. Other key export markets in 2018–19 were Japan, Saudi Arabia and South Korea87. World oilseed consumption is increasing. Rising incomes continue to lift Chinese demand for meat, and subsequently for high-protein animal feed such as soybean meal. In the short term, more Chinese soybean consumption is expected to be sourced from domestic stocks. However, with continued growth in consumption, demand for imports will increase5.

Tariffs imposed by China on imports of US soybeans resulted in a significant drop in Chinese imports of US soybeans. Only partially offset by increased South American imports, total Chinese soybean imports fell by 8% in 2018. With shortfalls in imported protein meals, Chinese food and meal processors substituted soybeans with other protein sources, including canola meal. This resulted in increased imports of canola from Australia and Canada5.

A fall in the world price of soybeans resulted from the trade dispute, any further escalation of which will continue to negatively affect the price of and demand for soybeans5.

The EU, Canola and Biodiesel

The EU canola market is dominated by Australia (53%) and the Ukraine (38%) due to the EU’s requirements for certified sustainable, non-GM canola144, the main end-use of which is biodiesel production. Australian canola growers sell into the European biofuel market by meeting greenhouse gas emissions savings requirements and certifying their canola as sustainable, enabling them to attract better prices than in Asian markets144.

However, the EU’s revised Renewable Energy Directive (RED) has placed a limit of 7% on conventional biofuels in transport, limiting the amount of food crops to be used in biofuels. The phase out of high-emitting biofuels (those from palm and soybean oil) is required, although other existing EU crop biofuels will be supported until 2030. The revised RED also sets targets for advanced fuels, including biofuels from waste and residues, while the rest is expected to come from renewable electricity and other fuels. These targets have essentially removed the transport sector as the single biggest driver for food based biofuel expansion in Europe68, 70, 138.

With EU policies that redirect investments into renewable electricity or advanced biofuels, and trends away from diesel vehicles towards hybrid and electric vehicles, challenges could be on the horizon for the Australian canola industry82.