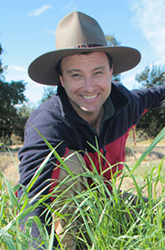 Matthew Newell has worked in agricultural research with NSW Department of Primary Industries since 1994. He has worked in many research programs during this time including biological control of wheat diseases, conservation tillage and increasing the adoption of grain legumes into farming systems. From 2008 Matthew has been one of the lead investigators in Perennial Grain research. This is the only current Perennial Cereal research program in the Southern Hemisphere. In 2016 Mathew completed a sabbatical at The Land Institute, Salina Kansas, USA where he developed new skills in plant breeding and agro-ecological research. Matthew is based in Cowra NSW and is currently investigating the nutritional value of perennial cereals as part of a dual purpose graze and grain production system.

Newell, M. T. and R. C. Hayes (2017). Perennial crop research at NSW Department of Primary Industries, Cowra. Your System- taking it to the next level: Proceedings of the 30th Conference of the Grassland  Society of NSW Inc. Cowra 24-26 July 2017. K. Behrendt, Grassland Society of NSW Inc.