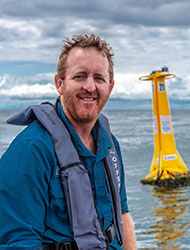 Paul Butcher is a Principal Research Scientist with the NSW Department of Primary Industries – Fisheries based at the National Marine Science Centre in Coffs Harbour.  Paul has been a member of the fisheries research team since 2004 involving research into commercial and recreational fishing gear.  More recently Paul has been the lead scientist on the NSW Governments Shark Management Strategy. This highly political, social and science driven project includes tagging and tracking White, Tiger and Bull Sharks and using new technologies like SMART drumlines, drones and tagging/tracking to minimise the chance of human interactions with sharks on coastal beaches. He is also involved in genetics projects to quantifying the size of the east coast White Shark population as well as eDNA to detect white sharks. Paul is also involved in research to determine if burying whale carcasses on coastal beaches is likely to attract sharks and is heavily involved in drone research involving tracking/detecting sharks, assessing biodiversity off coastal beaches, quantifying beach usage and for use in fisheries compliance. Paul also has a large number of students from various universities in Australia and overseas working on his projects