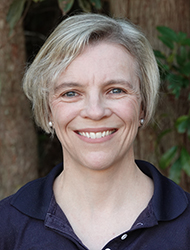 Sophie Parks joined the National Centre for Greenhouse Horticulture of the NSW Department of Agriculture* in 2002. She is a Senior Research Scientist, located at the Central Coast Primary Industries Centre, Ourimbah.

Sophie’s MHort and PhD research was conducted on the physiology of phosphorus toxicity in some species of Proteaceae, in particular Banksia ericifolia. Her research at the NSW Department of Primary Industries broadly investigates growing practices that affect the yield and quality of horticultural produce, and the sustainability of production systems. The most recent research has been to investigate practices for evergreen blueberries, such as techniques for thinning flowers and fruit to promote fruit size and quality. The nutritional needs of evergreen blueberry plants, growing in hydroponics and in the field, are a current area of work. Previous research has investigated vegetable crops, for example, the production efficiency of cucumber plants under different levels of climate control within the greenhouse, nitrate accumulation in leafy vegetables, and practices suitable for Asian vegetable crops in hydroponics and protected cropping.

In addition to being a researcher, Sophie has a passion for science mentoring and education and holds a Master’s degree in teaching. These interests are reflected in her role as a supervisor of research students and as a ‘STEM Professional’ in CSIRO’s STEM Professionals in Schools program.

Grewala HS, Maheshwari B and Parks SE (2011). Water and nutrient use efficiency of a low-cost hydroponic greenhouse for a cucumber crop: An Australian case study. Agricultural Water Management 98: 841–846.

Parks SE, Haigh AM and Harris A (2007). Responses of six species of Proteaceae, in containers, to controlled-release fertilizer. Communications in Soil Science and Plant Analysis 38: 1–11.