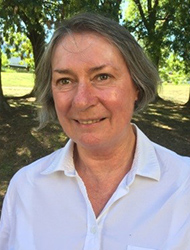 Sue Mortimer is currently a research scientist. She has undertaken research in Merino sheep breeding and genetics and has supervised the research programs of many of the research flocks at Trangie Agricultural Research Centre since joining NSW Department of Primary Industries in 1985.

Her research has applied quantitative genetics to sheep breeding, particularly by estimating genetic parameters for economically important traits of sheep for use in genetic evaluation and breeding program design for ram breeding flocks, aimed at improving the profitability of sheep production enterprises.  Her research program has included: the genetics of sheep meat production and quality, particularly the relationships those traits with wool production and quality traits in the Merino breed; the role of post weaner fleece traits in Merino breeding programs; genetics of flystrike in non-seasonal rainfall environments; and  genetic benchmarking  of Merinos using industry data (central test sire evaluation, wether trials).

Her involvement in central test sire evaluation has continued with the establishment of the Merino Lifetime Productivity site at Trangie.  With these programs and earlier projects involving the QPLU$ selection lines and other resource flocks at Trangie, Sue has extensive experience in genetic analyses. She is an Associate Editor for the journal, Animal Production Science.