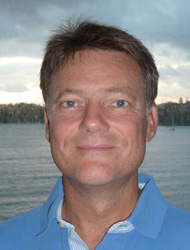 Vic Peddemors joined NSW DPI in 2008 and now heads the shark research section of the NSW Department of Primary Industries, providing scientific leadership for the group’s research and advisory effort. He is currently also an Associate Professor in Marine Biology at the University of KwaZulu-Natal, South Africa, and is a Visiting Fellow at the Graduate School of the Environment, Macquarie University, Sydney.

Vic has over 30 years scientific research experience in Antarctica, Australia, England, Holland, Mozambique and South Africa. His research interests cover a wide range of marine apex predators, but have particularly focused on cetaceans and sharks. This research has covered habitats from the tropics to the Antarctic whilst investigating the behaviour, biology, abundance and distribution of marine predators in relation to their habitat. Human-induced impacts, either through fishery or tourism interactions, have been a long-term study interest.

He has written over 80 scientific articles, more than 50 of which are peer-reviewed publications.