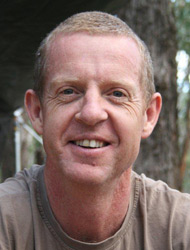 Dr Warwick Dougherty is a Senior Research Scientist (Soils), with 20 years consulting and research experience in nutrient management in agricultural industries. He is ‘Leader Soils - South’ for Agriculture NSW and leads a team of 30 staff undertaking soils related research in the southern half of NSW, encompassing the high rainfall coastal zones which include pasture and horticultural industries and the inland grain cropping region of southern NSW. He is based at the Elizabeth Macarthur Agricultural Institute at Camden, south of Sydney, Australia.

He has extensive research and development experience relating to the management of nutrients in the dairy, broad-acre cropping, vegetable and recycled organics industries and has worked on RD&E projects in NSW, South Australia, Victoria and Tasmania. His RD&E program has examined both the agronomic and environmental aspects of nutrient management.

He was Deputy Project Leader of the Accounting for Nutrients on Australian Dairy Farms project in collaboration with Dr Cameron Gourley. This research highlighted the apparently low efficiency of nutrient use – in particular nitrogen – Australian dairy farming systems and was a seminal study for the Australian dairy industry. He also led the research component of the ‘Nutrient Smart Farms’ project which focussed on reducing nutrient export from agricultural enterprises in the Hawkesbury Nepean Catchment which is the main drinking water catchment for Sydney’s 4 million inhabitants. Through a range of education and incentive programs this project reduced nutrient losses from agriculture by 67t and 17t of N and P respectively.

Warwick is particularly interested in developing management strategies that are cost-effective by understanding farming system and landscape influences on nutrient loss pathways. He recently completed the Coastal NSW Dairy Catchments project, the aim of which was to understand where in dairy farming systems were the greatest opportunities to reduce nutrient losses via surface runoff. This research showed that contrary to traditional investment strategies in Australia, in fact grazed paddocks of dairy farms represented the single greatest source of surface runoff nutrient loss, typically comprising 70-90% of losses via this pathway. This project also involved close collaboration with farmers in seeking to build a collective understanding of drivers and solutions to nutrient loss. This latter component involved the implementation of risk assessment procedures and development of nutrient management improvement plans in collaboration with farmers.

He currently leads two major projects worth $3M under the Australian Governments’ Carbon Farming Initiative. He is principal investigator on one of three dairy industry CFI funded projects examining the effect if nitrogen rate and nitrification inhibitor on nitrogen use efficiency and GHG emissions from dairy pasture systems. He also leads the NSW node of the Soil Carbon in Eastern Australia project and is responsible for examining the effect of climate and management on soil carbon stocks in coastal pasture systems in NSW.

His research interests also include understanding the benefits and risks of various inorganic and recycled organics such as biosolids and a range of composts in agricultural systems. Warwick has also collaborated on a range of research projects examining the nature of organic phosphorus in soils in a broad range of agricultural industries with a view to improving our management of P.

He is currently ‘Leader Soils - South’ for Agriculture NSW and leads a team of over 30 staff undertaking soils related research in the southern half of NSW, encompassing the high rainfall coastal zones which include pasture and horticultural industries and the inland grain cropping region of southern NSW.