The Glen Innes Agricultural Research & Advisory Station (GIARAS) is the research and development base for the Northern Tablelands of New South Wales run by the NSW Department of Primary Industries.

As DPI’s base for the high rainfall zone in northern NSW, GIAR&AS provides research and  development programs for eastern Australia’s sheep and cattle industry based on temperate perennial pastures.

Research and development work at the GIAR&AS is directed at improving the pasture base for grazing animals, and at developing industry capability to produce livestock products to commercial specifications through:

Working with the community 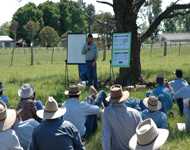 During 1912–1942, the station was one of the centres of youth education for agriculture in NSW. The first students took up residence in 1912 and received practical training and formal lectures. Included among these students were the ‘Dreadnought Boys’ – English boys brought to Australia to be trained in farm work. When considered proficient they were to be ‘… distributed to the farmers of the state’. The station trained some 325 Dreadnought boys between 1912 and 1930.

From circa 1930’s, research commenced in earnest with an initial focus on plant improvement with wheat, oats, maize, potatoes and tobacco breeding. Shannon Vale Nutrition Station, a remote sub-station of The New England Experiment Farm, was established in 1939 for research on ‘weaner ill-thrift’ - this was a prevalent limitation to sheep performance on the granite soils of the Northern Tablelands. With the solution found in ‘clover & super’ technology, research and extension work for the grazing industries progressed to:

Soil moisture has a well-defined seasonal pattern. Despite summer-rainfall dominance, soil moisture is progressively depleted during spring-summer, remains low and variable in late summer-autumn, and is recharged in winter. For pastures, the seasonal growth rhythm comprises high pasture growth during the spring primary growth phase, moderate pasture growth during the secondary growth phase in summer-autumn and low growth in winter. The major climatic stresses for pasture plants are summer-autumn moisture deficit, winter cold and episodic drought.