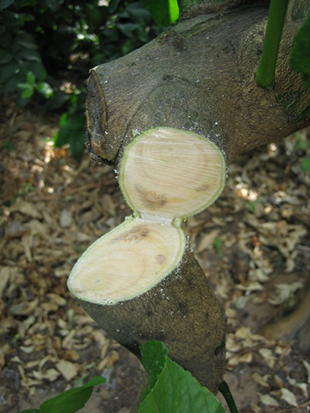 An exotic plant pest is a disease-causing organism or an invertebrate not present in Australia, and which threatens agricultural production, forestry or native and amenity plants.

The fungal pathogen Plenodomus tracheiphilus causes the exotic citrus disease mal secco. This pathogen is currently found in the Mediterranean Basin and Black Sea regions, where it is a serious disease for citrus producers. As mal secco has no known cure, continuing citrus production in infected areas relies on windbreaks to limit spore movement, early identification, and removing and burning infected material. If left unchecked, the fungus spreads throughout the tree killing infected limbs and eventually, the whole tree.

Mal secco infection leads to yellowed and wilted foliage and tree dieback: signs that are also associated with many other disorders. Distinguishing features for mal secco include a salmon pink or orange red discolouration of internal wood (pictured), which later turns brown to black, and tiny black dots on grey affected bark.

Prevention is the best option to protect against mal secco. To reduce the risk of mal secco being introduced to Australia, citrus budwood should only be imported through legal channels and tested in post-entry quarantine before release. Citrus growers must remain vigilant and report any suspicious disease symptoms to ensure Australia’s citrus industry remains free from mal secco and other exotic citrus diseases.

Further information on how to recognise mal secco and protect your property from its introduction:

Information about exotic pests and biosecurity for citrus orchards is available in the industry manual and from the Citrus Australia website.