Black core rot caused significant damage to the southern Imperial mandarin crop during the 2016 season. A major problem was that not all infected fruit had symptoms at harvest. The fungus then grew during transit and infection was discovered at retail or on the kitchen bench.

Even during the early stages of infection, black core rot causes significant off flavours and the black fragments ruin the appearance of juice. Fruit fall is another symptom (pictured).

NSW DPI citrus development officers were on the front line in the Sunraysia and Riverina regions helping growers tackle the problem.

Samples were sent to the NSW DPI Plant Health Diagnostic Service where Citrus Pathologist, Nerida Donovan, identified the Alternaria fungus in affected fruit. Infection was sporadic, with not all blocks affected and differences in infection across blocks. Pictured is a sample showing an advanced Alternaria black core infection.

The rot starts in the stylar (navel) end of fruit, with the fungus entering either during early fruit development (i.e. from petal fall) or through imperfections or micro-cracks.

Diseased fruit colour prematurely and a brown to black discolouration might be evident at the stylar end of affected fruit (pictured stylar external and cut view).

Mealybug infestations can exacerbate issues with black core rot. Once infection has established, it is too late to spray. 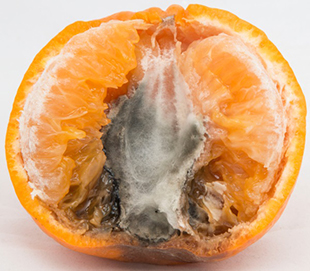 The disease is common, but the level of infection differs with the season. It is difficult to predict whether the high incidence experienced this year will continue into coming years. The current management practice is to delay harvest to let infected fruit fall from the tree.

Imperial mandarins in Queensland did not seem to be affected this past season, but it is likely that their existing spray program to manage other fungal diseases also reduced the level of core rot.

Azoxystrobin is registered in Australia to manage Alternaria brown spot, which affects the leaves, young stems and external fruit rind of susceptible species such as mandarins. Alternaria brown spot is not an issue in the southern growing regions due to the climatic conditions.

This season, NSW DPI will conduct replicated trials to assess how effective systemic fungicides and copper protectant fungicide programs are against the Alternaria strain that causes black core rot in mandarins in the southern growing regions.

Well-pruned trees have the advantage of better spray penetration and reducing levels of dead wood that could harbour the causal fungus can also help.