Mealybugs are soft-bodied scale-like insects that feed on plants. They are typically covered in a soft, waxy coat of filaments which gives them a white, ‘mealy’ appearance. A number of these sap sucking insects are recognised pests of grasses in Australia. Other mealybug species are pests of crops including fruits, vegetables and cotton. Grasses impacted by mealybugs include turf grass, cereal crops, sugar cane, rice and pastures.

A species of mealybug, Heliococcus summervillei, commonly called pasture mealybug (or paspalum mealybug) was reported on the North Coast of NSW in March 2020. Pasture mealybug has been infesting and damaging pastures, particularly summer growing grasses (Figure 1). 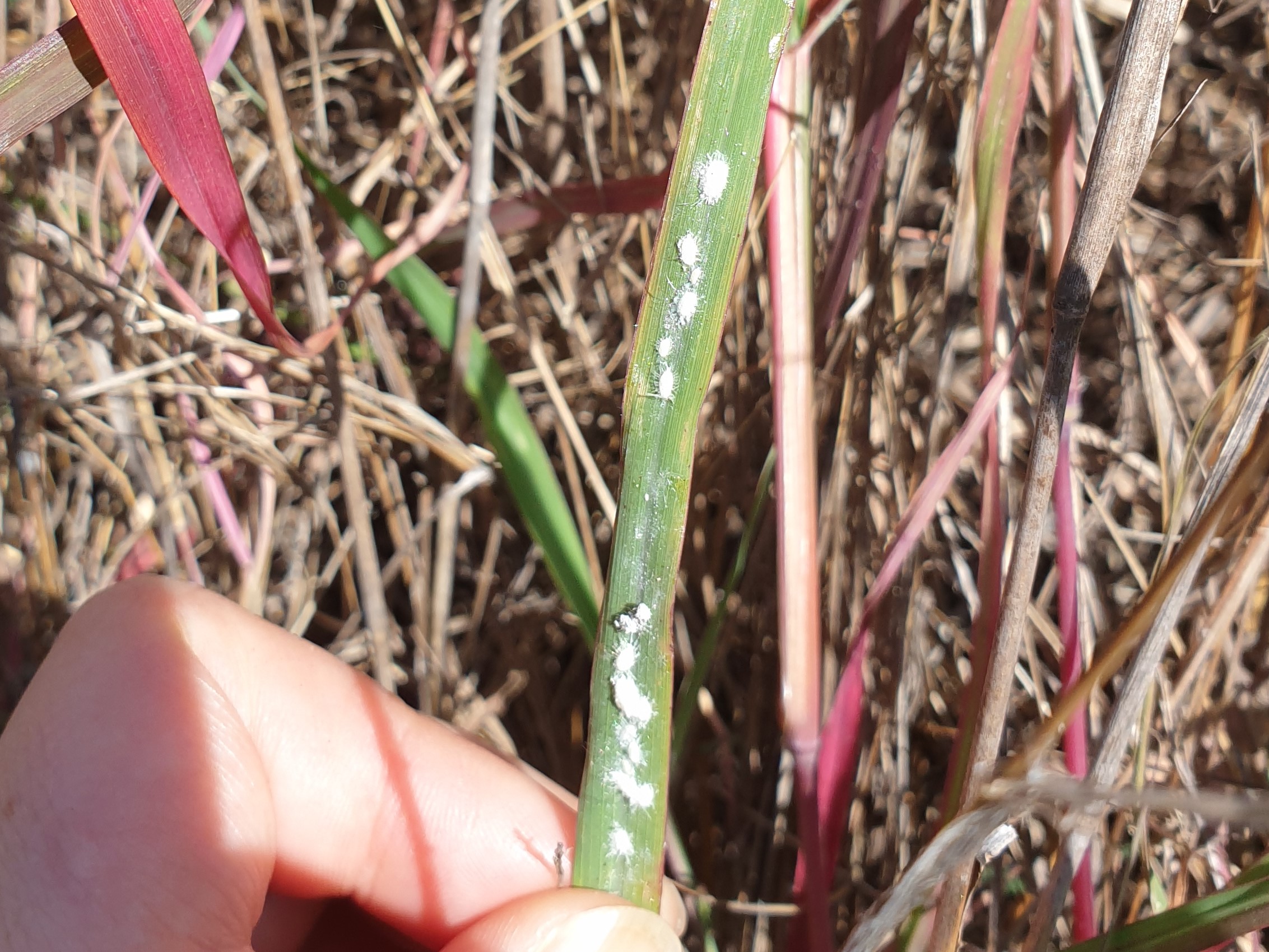 Pasture mealybug can be found as adults, reproductive masses and early instars (juveniles) on both roots and leaves of host grass species. Adult females are white or pink, 2-3 mm long and can be seen with the naked eye. Juveniles and egg masses are very small and difficult to see without a hand lens. DNA sequencing is required for species identification of these life stages and can also be used to identify adults.

Typically pasture mealybugs are found on grasses that have green leaves (Figure 2). Generally, this occurs in the warmer months of the year, especially following rainfall. During these times pasture mealybugs can be found on leaves, the soil surface and among the plant roots. In some high rainfall, warmer environments, such as the North Coast of NSW, mealybugs can be found all year round. During cool and/or dry periods when grasses are dormant and their leaves have dried off, pasture mealybugs retreat below ground. They can survive on grass roots and deep in the soil profile and have been found to a depth of 0.8 m. Prolonged flooding may kill pasture mealybug.

Other white insect larva can commonly be mistaken for pasture mealybug. For example, the mealybug ladybird (also known as mealybug destroyer) larva (Cryptolaemus montrouzieri) a beneficial insect, that has been identified in pasture mealybug infested sites on the North Coast of NSW (Figure 3). The most sustainable means of managing insect pests is to allow populations of beneficial insects to build up so they can suppress the pest. Insecticides can be effective but most have broad-spectrum activity which typically affects the target insect as well as the beneficials and other insects, reducing the capacity of populations of natural enemies to increase. An integrated pest management (IPM) approach is best as it involves several elements such as strategic insecticide use including selective control options, knowledge of the crop, pest and associated natural enemies.

History of other mealybug species has shown that they can become resistant to pesticides. Therefore, care must be taken to ensure appropriate use of insecticides within an IPM framework to reduce selection for resistance. Biological agents have been developed for some species of mealybug, but not for pasture mealybug to date.

In 2019, the Australian Pesticides and Veterinary Medicines Authority (APVMA) issued a permit (permit number 88482) for the use of spirotetramat (registered as Movento® 240 SC) to control pasture mealybug in mixed pasture. The permit is for use in NSW and Queensland. Movento® is considered compatible with IMP systems when used as directed.

Movento® is registered for the control of a range of sap sucking pests including some mealybug species in a range of crops. It is highly pest specific and is particularly efficacious against juvenile stages. This systemic insecticide is translocated through the plant phloem and xylem. The phloem transports nutrients both up and down the plant. It therefore moves the insecticide up to the growing tips and down to the root system. Most other systemic insecticides are translocated by the xylem only. The xylem only moves in an upward direction, meaning that insecticides remain in the upper part of the plant and do not reach the roots where mealybugs typically feed.

The timing of the application of Movento® is critical for effective control of pasture mealybug and is outlined in the permit. As pasture mealybugs spend most of their life cycle in the soil, insecticide application needs to be when juveniles are first observed on the plant leaves and crown. Since the insecticide is systemic, the plants need to have green leaves to take up and translocate the insecticide throughout the plant. Applications should be made when population numbers are building, rather than well established. A maximum of two sprays should be applied with a minimum retreatment interval of 14 days.

In general, use higher water rates to ensure thorough spray penetration for effective pest control. It is also important to spray the total area affected by pasture mealybug and a barrier zone of approximately 50 m beyond the affected area.

Table 1 does not list of all products registered for each active constituent as there are many generic products that have copied the use pattern from other products. For full list of registered products go to the APVMA website and search on the Pubcris search engine for pasture and the active ingredients listed below.

Table 1: Insecticides registered for use in pastures in NSW that may be effective in the control of pasture mealybug. All should be applied when juveniles are first observed. All chemicals listed are contact insecticides and effective on insects by direct contact or ingestion. None of these insecticides are selective and will control both insect pests and beneficial insects.

Users of agricultural (or veterinary) chemical products must always read the label and any permit, before using the product. Where permit instructions differ from the label, users must follow the permit instructions. Users must strictly comply with the directions on the label and conditions of any Permit. Users are not absolved from compliance with the directions on the label or conditions of the Permit by reason of any statement made or omitted to be made in this publication. Misuse of chemical products could result in chemical residues in meat and milk.

Controlling pasture mealybug
Controlling-pasture-mealybug.pdf
Pasture dieback
Be on the look out for the condition killing summer grasses