The Belmont Red has been developed in Australia by the CSIRO at the Belmont Research Station near Rockhampton. The breed as released by CSIRO comprised half Africander, quarter Hereford and quarter Shorthorn blood, but because of the upgrading system adopted by the breed society, herds that are developed in the industry will incorporate a proportion of genes from other breeds as well.

Breeding commenced in 1956, with the first bulls being released for sale in 1968 and the first exports made in 1976 to Indonesia.

Emphasis in the breed has been placed on objective selection for heritable and economically important traits such as growth rate, tick resistance, and fertility. Performance tests are compulsory for the registration of bulls.

The breed is found mainly in central and southern Queensland, with a few herds in other States. 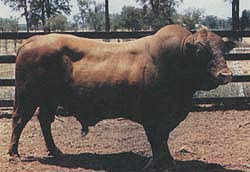 The breed is predominantly red, with white markings at times, although some colour differences are occasionally evident. The cattle have good weight gain and good fertility. They are heat-tolerant, and while tick resistance is lower than that of the pure Bos indicus, it is still adequate. Belmont Reds are much more docile than the Brahman-derived breeds and under extensive management are easy to handle.

For further information, contact the Belmont Red Association of Australia at:

The author thanks the Belmont Red Association of Australia for their assistance in preparing this Agfact.