The Braford breed originated at ‘Edengarry’ north of Rockhampton in Queensland in 1946 when the Rea Brothers introduced Brahman bulls into their Hereford breeders to help combat the effects of drought and ticks. The breed is now established with 50% Brahman and 50% Hereford blood.

A Braford herd is at home in all environments. Braford commercial and stud herds are successfully operating under every climatic condition Australia has to offer, as well as those in New Zealand, proving Brafords’ adaptability.

There are now well over 25,000 registered Brafords, mainly in Queensland and New South Wales. 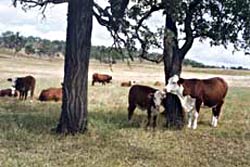 Brafords are particularly suitable for commercial breeders seeking the advantages of hybrid vigour by direct crossing with any breed. For example, the hybrid vigour gives the progeny from a Hereford × Braford cross a better growth rate and the ability to handle the extremes in hot and cold weather.

Brafords excel in a feedlot situation. Their feed conversion ability has been proven repeatedly in past years, with wins and places in many of the carcase challenges across the country. For example, over 100 days, 18–20-month-old steers can put on an average of 2.45 kg/day with a feed efficiency of 5.3 to 1. The finished product has even fat distribution, bright red meat and white fat, which is ideal.

It is not only Braford sires which can provide the Braford benefit in a crossbreeding program—commercial cattle producers have found that the Braford female, with her milking and mothering ability, fits well into breeding programs where European beef breeds such as Simmental, Limousin, Blonde d’Aquitaine and Charolais are being used.

Some markets specify a maximum of 25% Bos indicus for some grades. This can be achieved by using a registered Braford bull over Hereford or English breeds, or by using a Poll Hereford bull over Braford cows, thereby maximising the great traits of the Braford female.

The Australian Braford Society was formed in 1962 in Rockhampton. For details on breeder locations or for more information on the Braford breed, contact the Society at:

This Agfact is based on information provided by the Australian Braford Society. Their contribution is gratefully acknowledged.