One of the oldest French breeds of cattle, the Charolais, was developed in the Charolles district in central France from native cattle bred with some Shorthorn infusion.

The cattle also became well established in the Nièvre Province of France, where they were improved and became widely known as Nivernais cattle. A herd book was established for these cattle in 1846, followed by a separate herd book for the cattle in the Charolles region in 1882. The two societies merged in 1919 and today the breed is one of the most important French breeds.

The Charolais was the first of the European breeds to be introduced into Australia with the importation of pure French semen in 1969. Upgrading programs started immediately and were aided by small but high-quality importations of purebred bulls and heifers.

Numbers of Charolais have rapidly increased since 1969, and today the breed and its crosses are found in most parts of Australia. 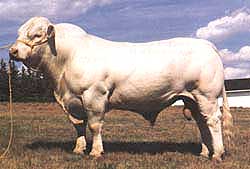 The breed colour varies from white to a light straw. They are large-framed animals, long-bodied, heavily muscled and late-maturing. Most Charolais are horned, though some polled animals are now being bred. Docility is a feature. Steers produced on good pasture yield heavy, well-muscled, fine-textured, though lean, carcases. Crossbred calves from good milking mothers can yield excellent carcases at 9 to 10 months of age.

For further information contact the Charolais Society of Australia at:

The author thanks the Charolais Society of Australia for their assistance in preparing this Agfact.