The Devon breed is said to be one of the oldest breeds of cattle in existence. The original Devon was prehistoric and thought to be descended from the original cattle in Britain. The breed was developed in Devonshire’s grass-covered hills in south-western England, and originally was bred for the high quality of its beef, though sometimes it was used as a dual-purpose type.

A polled version of the breed, resulting from a purebred hornless mutant, dates back to 1915. It was first imported into Australia in 1800 by Captain John Macarthur and was used in the early days as a draught animal.

The Devon is found in moderate numbers throughout Australia, but particularly in the safer rainfall areas of south-eastern Australia. 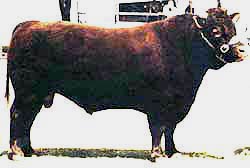 Colour ranges from deep red to pale chestnut, with darker red being the more popular colour. The skin is yellow and the muzzle flesh-coloured. The horns are of medium size and are creamy white, with the tips a darker shade.

The Devon is a handsome animal with clear-cut lines and a blocky but symmetrical body. It is evenly fleshed, with good breadth and depth.

Noted as a good forager, it is an early-maturing breed but is capable of producing finished carcases from calf through to heavyweight bullock. For further information, contact the Devon Cattle Breeders Society of Australia at:

The author thanks the Devon Cattle Breeders Society of Australia Limited for their assistance in preparing this Agfact.