The Poll Hereford was first developed in significant numbers by Hereford breeders in the USA. The breeders (from the Mid-West) saw benefits in a hornless breed, so naturally occurring ‘hornless’ Herefords were selected and bred. By 1907 there were sufficient numbers to establish the first Poll Hereford register.

The breed was introduced to Australia in 1920, when three bulls and three cows were imported into Queensland. Further shipments followed. The breed expanded rapidly in Queensland and spread to the southern states. The first breed association was formed in 1922, and the Australian Poll Hereford Society was established in 1933.

The breed is adaptable and so it is now established throughout Australia. It has become one of the more numerous, in terms of both animals and registered stud herds. However, the highest numbers are still found in the eastern states. 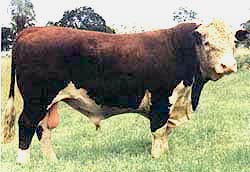 The Poll Hereford exhibits the characteristic colour markings of the Hereford: medium to rich red, with white markings on the face, brisket, neckline, crest, switch and legs (below the knees and hocks). The distinctive white face tends to dominate in crosses with other breeds. The poll is dominant.

The breed is well suited to all markets, being essentially medium-sized and of medium maturity. The breed produces a range of carcases from vealers and yearlings to steers and bullocks, depending on the genotype, feeding and management. Recent imports of larger framed, later maturing strains of the breed make it even more versatile.

For further information contact the Australian Poll Hereford Society at: 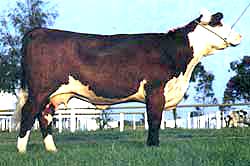 The author thanks the Australian Poll Hereford Society for their help in preparing this Agfact.