The Santa Gertrudis breed was developed in Texas, USA in the 1920s following attempts by King Ranch to cross Brahman and Shorthorn cattle to produce animals that would perform well under the local harsh, hot and dry conditions.

By 1940, a large herd had been developed on King Ranch and was recognised as a pure breed by the United States Department of Agriculture in that year. The composition of the foundation sire was three-eighths Brahman and five-eighths Shorthorn. A Santa Gertrudis (strain) bull was donated to CSIRO by Robert Kleberg Jnr, King Ranch, in 1933, before official recognition of the breed. The breed as such was first established in Australia with importations in 1952. Further importations were made in 1953, 1954 and 1982.

The breed is noted for its adaptability and is found in all climatic areas of Australia. 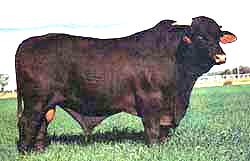 The breed is cherry red, occasionally with white markings on the underline, and has a short, smooth, slick coat. Santa Gertrudis cattle show many of the Bos indicus characteristics: the hide is loose and there are neck and navel folds; the male has a small Zebu-type hump. Ears are medium to large and individuals are horned or polled. The female is noted for ease of calving and milking ability.

The breed is noted for heat tolerance as well as tick and bloat resistance. Carcases from very young cattle develop a large eye muscle of meat with little or no waste fat. Older steers yield well, with minimum fat cover acceptable to premium world markets. Weight for age is a noted attribute of the breed.

Quality and uniformity in registered cattle is enforced by a rigid classification system by the breed association.

The author thanks the Santa Gertrudis Breeders’ (Australia) Association for their assistance in preparing this Agfact.