While the presence of cattle in south-west England can be traced for some 7000 years, the South Devon is thought to have existed in these parts for about 400 years. It is believed to have evolved from the large red cattle of Normandy in France which were imported to England at the time of the Norman invasion. Historical evidence indicates that isolation caused the divergence of the North and South Devon into physically distinct types, and occasional crossing between the two breeds occurred until the mid-19th century.

South Devon were one of the few British breeds to have been selected for drought purposes as well as for beef and milk.

The first importations into Australia were of milking cows carried on sailing ships. Several large importations occurred in the late 1800s and early 1900s but the breed then lost its identity through crossbreeding. Importations from Britain took place in 1969, and the first purebred animals were imported from New Zealand in 1971.

The breed occurs in small but growing numbers in most states of Australia. 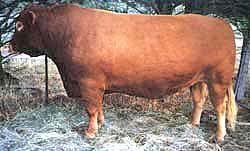 The South Devon is the largest of the British breeds, being large-framed, more muscular in shape and later maturing.

Its colour is a rich, medium red with copper tints, though it varies in shade and can even appear slightly mottled. The skin is exceptionally thick, loose and mellow. The breed is mostly horned although some polled individuals do exist. Its temperament is excellent.

South Devons yield leaner carcases than do other British breeds. Although most herds were milked during and soon after the Second World War, since the 1960s the trend has been towards beefier sires, with few herds now milked in England and none in Australia.

For further information, contact the South Devon Cattle Society of Australia Inc. at: 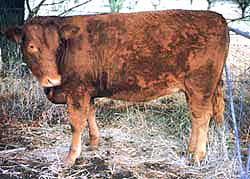 The author thanks the Australian South Devon Cattle Breeders’ Association for their help in preparing this Agfact.