The Tuli is a pure African Sanga breed. The Sanga breeds were taken by the Bantu tribesmen on their southern migration, and eventually occupied most of Eastern and Southern Africa. In 1945 the Tuli breeding station was established in Zimbabwe to enhance the productivity of local herds being recognised for their increased beef production.

The Tuli was introduced to Australia in 1990 by CSIRO and the Boran and Tuli Consortium through the use of embryo transfer. Embryos were collected from purebred registered Tuli donors in Zimbabwe and were implanted into Australian-bred recipients in the Cocos Islands. This embryo transfer program began in August 1988 and continued for 5 months — 74 calves resulted from the project and were cleared for transportation to Australia on 2 March 1990. 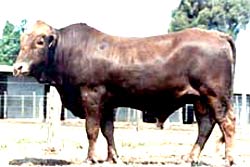 The Tuli is a medium-sized animal which, in its neat compact frame, incorporates high fertility, hardiness, adaptability and excellent beef qualities. Its sleek and glossy short-haired coat varies in colour from silver, through golden brown to rich red.

Tulis are known for their early maturity, docile nature, good mothering ability and high fertility, and they can withstand intense heat without showing signs of stress. Due to their unique genotype, Tulis offer the maximum hybrid vigour in a crossbreeding program.

The meat of the Tuli has relatively low levels of fat (just sufficient to give a good marbling), and is tender and juicy.

The Tuli Association of Australia

There are 28 members of the Tuli Association in Australia. Further information on the Tuli breed can be obtained from:

This Agfact is based on information supplied by the Tuli Association of Australia Inc. Their contribution is gratefully acknowledged.

Photograph supplied courtesy of the Tuli Association of Australia.