BREEDPLAN carcase estimated breeding values (EBVs) for fat depth (FD), eye muscle area (EMA) and retail beef yield% (RBY%) have been available since 1990. Until 1998 these were calculated from ultrasound scans of live cattle and were expressed on an ‘age corrected’ basis.

Demand for a wider range of EBVs, including an EBV for marbling, and the need to also use abattoir data, have led to major enhancements since 1999. This was possible through Beef CRC (Cooperative Research Centre) research linking BREEDPLAN herds with progeny tests, scanning measurements, and detailed abattoir measurements.

Carcase EBVs can also be expressed in a variety of ways. Until 1999, EBVs were expressed at a constant age of 450 days. The units (‘mm of fat’, ‘cm2 of EMA’) largely reflected differences in bulls, because it was mainly bulls that were scanned. With steer (and heifer) abattoir information to be merged with scans (mainly of bulls, but also of some heifers and steers), it was decided that a steer carcase weight endpoint is more logical.

Breeders and Breed Societies collecting ultrasound and abattoir data have the option to provide the following EBVs:

These EBVs are calculated from a mix of abattoir, ultrasound and overseas EPD data. The availability of these varies from breed to breed. There is currently a considerable amount of scanning being done, and in most breeds that provides over 90% of the ‘carcase data’.

Note: When submitting abattoir information on marbling, whole AUSMEAT scores are not useful. A more graduated scoring system (1.0, 1.2, 1.4 etc.), such as that used by Meat Standards Australia, is required.

This EBV continues to be mainly calculated from the correlations between weight, fat depth and EMA. Actual abattoir yield figures can also be used, but this is currently of limited availability.

Sire 2 may suit a buyer wishing to produce leaner and better muscled calves than the average, with higher carcase weights and higher percentage retail meat yield, but less marbling. 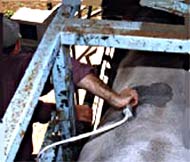 As abattoir carcase data is always slow, difficult and costly to obtain, there are big benefits if measurements can be taken on live cattle.

Scanning is therefore very important, and expected to be so for some time yet. Breed Societies associated with BREEDPLAN will only accept scan results from accredited scanners. The accreditation scheme is administered by the Performance Beef Breeders Association (PBBA), with advice from the Animal Genetics and Breeding Unit (AGBU). 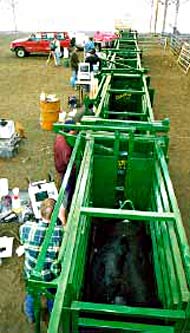 Contractors have to pass a proficiency test involving scanning 30 head of cattle twice in a double blind test. The cattle are then slaughtered, and fat depth, eye muscle area and intramuscular fat percentage are measured.

Differences are found both between units of the same make of scanning equipment, and between different makes. Technicians are therefore accredited for a specific machine. A list of accredited technicians offering commercial services is available from the Performance Beef Breeders Association (phone (02) 6771 1648) or the BREEDPLAN website

Which cattle to scan?

Ensure that there is at least 3 mm of P8 fat, and preferably, on average, 5 mm of P8 fat. Heifers will often provide the best IMF% information for evaluating their sires and relatives, as their scans are the best predictor of IMF% in steer relatives. There is also a case for scanning steers while they are in large management groups as they near finishing. This avoids the problem of waiting for abattoir results when subgroups have been slaughtered on different dates.

Further improvements to carcase EBVs will initially depend on development of scanning technology and better abattoir traceback. The next big step is expected to be the use of gene marker technology. Current thinking is that this will be an important extra source of data for BREEDPLAN — carcase EBVs would be calculated from scans, abattoir reports and gene markers.

Gene mapping technology, as being researched by the CRC, should also assist selection for other carcase quality traits, for example tenderness. There is also research indicating that temperament correlates with tenderness, and in future this data may also be used in BREEDPLAN.

See other Agnotes in this series for further information on BREEDPLAN and EBVs.

BREEDPLAN and GROUP BREEDPLAN results are calculated using software developed by the Animal Genetics and Breeding Unit (AGBU), a joint institute of NSW Agriculture and the University of New England. AGBU receives a majority of its BREEDPLAN R&D funding from Meat and Livestock Australia.