New South Wales Department of Primary Industries (NSW DPI), the University of New England (UNE) and Meat and Livestock Australia (MLA) have joined forces to create a resource population for multi-breed genomic evaluation in beef cattle, also known as the southern multi-breed project. This project aims to record thousands of beef cattle, from 6 different breeds, recording early growth and development traits as well as traits related to cow reproduction on 6 NSW DPI research farms. Steers from the project are finished at UNE’s Tullimba feedlot, where valuable feed efficiency data is collected before animals are recorded for meat quality traits. This population of 6 breeds forms a key reference for multi-breed genomic and genetic evaluation, with all animals genotyped and some sires sequenced. This provides a magnificent resource for exploration and learning. Numerous PhD scholarships are now available for students to work as part of this project.

If you are interested in another topic related to beef cattle production please contact us to discuss the idea of your choice. Please contact A/Prof Sam Clark or Dr Kath Donoghue kath.donoghue@dpi.nsw.gov.au to discuss. To apply please send cover letter and CV to Sam Clark at sam.clark@une.edu.au.

The Southern Multi Breed (SMB) project is a collaborative R&D project involving NSW DPI and the University of New England being conducted on five NSW DPI research stations, and the UNE Research Feedlot over the five years, 2020 to 2025.

The SMB project will provide an invaluable source of information for seedstock and commercial cattle breeders.

The project is co-funded by NSW DPI, UNE, Meat & Livestock Australia (MLA) and the Commonwealth Government through the MLA Donor Company (MDC).

This multi-party co-investment will make a significant contribution to the national aim of doubling the rate of genetic gain in the Australian beef herd.

The outcomes of the $7.3m SMB project will deliver significant enhancements to the current within-breed genetic evaluations conducted by BREEDPLAN, as well as allowing Australian beef producers for the first time to directly compare animals for all BREEDPLAN traits and assess their genetic merit irrespective of breed. High-quality records on hard to measure traits that have important impacts on beef herd profitability will be recorded as part of this project. These traits include female fertility traits (such as days to calving), as well as feed efficiency and carcass traits.

As a result of this intensive, precise recording of new, existing and hard-to-measure traits, seedstock and commercial bull buyers will have access to EBVs (Estimated Breeding Values) with more accuracy for describing the genetic merit of individual animals. New traits will also be recorded throughout the life of the project, giving seedstock and commercial bull buyers' access to EBVs for a wider range of traits that impact commercial profitability.

The new traits include female fertility traits (eg lactation anoestrus, age at puberty, gestation length for natural joinings) and welfare traits (maternal behaviour at calving). Other traits will be evaluated throughout the life of the project for potential inclusion ion BREEDPLAN and their impact on commercial profit. 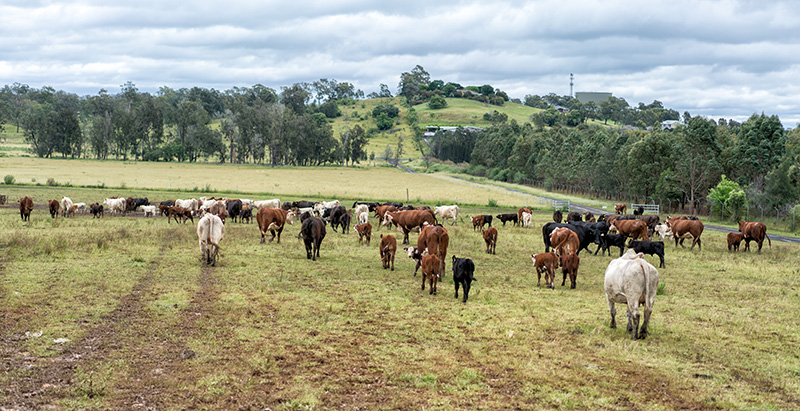 The data collected during the SMB project will also provide a platform that contributes to developments within BREEDPLAN that will allow for the estimation of multi-breed Estimated Breeding Values (EBVs).

Multi-breed EBVs will enable producers the opportunity to directly compare animals for BREEDPLAN traits across those six key Australian beef breeds involved in the project for the first time. Currently, all BREEDPLAN EBV’s and $Indices are breed specific and cannot be compared across breeds.

Multi-breed EBVs and $Indices are expected to increase productivity, profitability and efficiencies across the beef sector by allowing fair comparison of breeds and the best use of these in crossbreeding programs.

The inclusion of the Brahman breed links the SMB project to the Repronomics2 project currently being run in northern Australia, ensuring national outcomes and benefits, led by AGBU.

Foundation cattle were sourced from across Australia and are producing progeny that are being recorded head-to-head on NSW DPI research stations from conception to slaughter over the five years of the project (2020-2025).

It is planned that a total of more than 8,000 calves will be born, with 3000 steers and close to 3000 heifers retained for joining. Specifically, the project will produce up to 2000 calves per annum at five DPI research stations across NSW:

The steers will be backgrounded prior to entry into the UNE research feedlot ‘Tullimba’ and slaughter at industry relevant carcass specifications. The two DPI research stations involved in the backgrounding are:

Multiple breeds are represented at each site, allowing for direct comparison and recording of animals born and raised in the same environment. This means that another unique benefit of the project is that it will allow comparisons across different locations, with varying conditions such as environment, rainfall and pasture type.

The project includes R&D into the best methods to use multi-breed information – R&D that is vital to turning the data collected across the herds into information that can benefit breeders and commercial producers.

The NSW Government and project partners recognise that genetic improvement is one of the most important strategies to improve productivity and profitability of livestock enterprises. The combined 10-year value of genetic improvement in beef cattle and sheep industries in NSW through BREEDPLAN and Sheep Genetics is $1.18 billion, comprising $508m in beef cattle and $672m in sheep (AGBU, 2020).

The co-investment by NSW Government and the partners in this flagship R&D project will help generate critical multi-breed information needed to further enhance the capabilities of BREEDPLAN.

Southern Mulit-breed Project set to offer insight into more heritable fertility traits
The long-held stereotype that fertility is only a problem in the north could soon be thrown out the window. Genetics rather than management play just as big a role, according to Dr Brad Walmsley of NSW DPI. Read more