This is a dynamic and evolving document that will be updated regularly as we increase our understanding of the incorporation of Automatic Milking Systems (AMS) in Australian dairy farms. Please check online for regular updates.

The whole farming system should be taken into consideration recognising that farm management practices have an impact on several key performance indicators (KPI). It is also true that circumstances of every aspect of the operation influence the management decisions made on farm which then influence the key performance indicators of the operations.

The purpose of this document is to highlight some indicators that can be used by farmers who have AMS to look at the performance of different aspects of their system as a 'snap-shot' at a given point in time.

The context of the whole operation must be considered, as the data can only show the 'electronic events' and does not give any indication of what the people power are doing behind the scenes.

What information do AMS need to monitor? 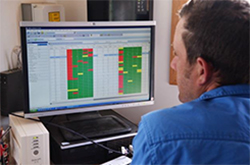 Farmers that invest in AMS are largely freed from the task of routine milking. However, there are still a lot of jobs that need to be done on the farm.

In addition to spending time on other on-farm tasks such as feeding cows and taking care of breeding and animal health of their herd, they still need to devote some time each day to spend in front of the computer to monitor reports and alerts that are generated by the software.

This is an integral aspect of the routines that cannot be dismissed as it will ensure that appropriate management decisions are made in a timely manner through monitoring the performance of the individual cows and the broader system.

AMS farmers still monitor the traditional KPI such as days in milk, average daily milk production or pregnancy rate. However, they also have some KPI that are specific to this type of operation.

The purpose of this document is to introduce some of those KPI specific to AMS. They should not be analysed in isolation as they are generally interrelated.

Table 1. Some common KPI that are used by AMS farmers.

Due to variability in AMS, the average values of several days are commonly used for variables such as milking frequency.

Many exception reports indicate cows or equipment that breach thresholds set within the equipment support software. It is these reports that allow the herdsperson to identify cows that require assistance or inspection, for example; cows that require an udder health check, cows that are not consuming an acceptable level of their feed allocation, any cows that have dropped milk production dramatically.

It is a common observation that some of the most successful AMS operators use the time freed up from milking to monitor cow and system performance indicators and shift their focus to improving an aspect of their operation that has previously been of lower priority due to time constraints.

Prepared by Dr. Nicolas Lyons together with Assoc. Prof. Kendra Kerrisk (Project Leader FutureDairy, The University of Sydney). The authors would also like to recognise the valuable input from commercial companies and farmers.