This article discusses some research carried out during the summer of 2001–02 at NSW Agriculture’s Wollongbar Agricultural Institute in northern New South Wales. The research examined the effect on milk production of grazing dairy cows if heat stress is reduced.

In the early 1990s, collaborative research was carried out by the Queensland Department of Primary Industries, the University of Queensland and the Dairy Research Development Corporation to alleviate the negative effects of heat stress on lactating dairy cows. In summary, this research showed the following:

To carry on with further research in this field, an experiment was undertaken at Wollongbar Agricultural Institute during the 2001–02 summer–autumn period (December to March). This work differed from previous research in that:

The typical summer grazing system at Wollongbar is for cows to graze kikuyu pastures which contain either shade trees or shade shelters. Cows are usually fed a grain-based concentrate at the rate of 7 kg/day, in the dairy.

If the THI reached 72 (see Figure 1) at any time between 9 am and 2 pm (Eastern Daylight Saving Time), then cows were given one of the following treatments:

Cows were left in paddocks of kikuyu pasture and shade trees, similar to those shown in Figure 2. 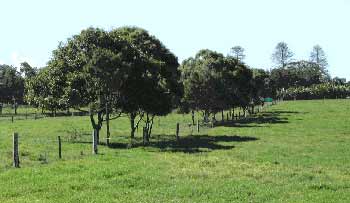 Cows were removed from paddocks and housed on a feedpad covered in polypropylene shadecloth graded '80% shade'. The feedpad was fitted with sprinklers located 3 m above the feedpad floor (see Figure 3). These sprinklers ran continuously while cows were housed on the feedpad. Once cows were moved to the feedpad from pasture, they remained there until the ‘pm milking’. Feed supplements were not available. 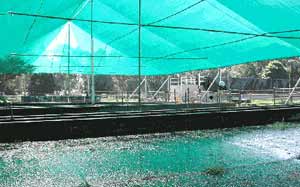 Cows were treated as in treatment 2, but were given 3.5 kg lucerne hay per cow while housed on the feedpad.

There were 15 early lactation cows in each group.

The experiment lasted for 107 days.

Of the 107 days of the experiment, there were 55 days when cows in treatments 2 and 3 were brought onto the feedpad.

On the days when cows were brought onto the feedpad, they were there for an average of almost 6 hours, with entry times to the feedpad ranging from 9 am to 2 pm.

The THI averaged 78 in the paddock while cows were housed on the feedpad.

Although a THI of 72 was the indicator of when to bring cows onto the feedpad, there were days during the experiment when the average paddock THI averaged less than 72 while cows were housed on the feedpad. This is because it became cooler or less humid on these days after the cows were moved to the feedpad.

Another important result (not shown in Figure 4) was that cows supplemented with hay on heat-stress days also produced more milk on days when there was no intervention. This indicates that the higher plane of nutrition of cows fed a hay supplement may have had a residual nutritional benefit on cow metabolism on non-heat-stress days.

Rectal temperatures at 3 pm of cows kept in the paddock (treatment 1) were elevated on days when the THI reached 72.

Up to a THI of 82, rectal temperatures of cows housed on the feedpad on heat-stress days remained normal.

Rectal temperatures of ‘feedpad + hay’ cows were slightly elevated (0.2°C) when the THI was greater than 82 (see Figure 5).

The degree of skin wetting caused by the sprinklers is an important factor in this process. Using fine sprinklers that produce a small droplet size can exacerbate heat stress by not achieving sufficient skin wetting. Cows in this experiment were saturated to the bottom of their flanks. This degree of wetting seemed ideal as it avoided wetting the udder and consequently increasing the risk of mastitis.

The financial support of the Subtropical Dairy Program and the Dairy Research Development Corporation is acknowledged.