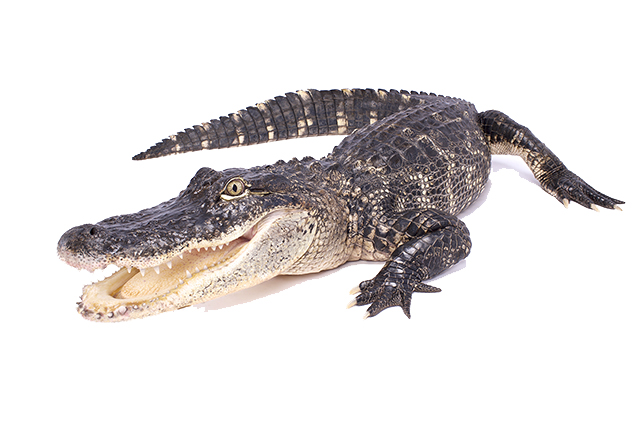 The American alligator (Alligator mississippiensis) originates from southeastern USA where it inhabits freshwater wetlands from Texas to North Carolina. American alligators are usually found in freshwater, in slow-moving rivers as well as in swamps, marshes and lakes.

The average size for an adult female American alligator is 2.6 m and the average size for a male is 3.4 m. Both males and females have an armoured body with a muscular flat tail. American Alligators have a long snout with upward facing nostrils at the end; this lets them breathe while the rest of the body is underwater. Alligators have a U-shaped snout, while crocodile snouts are more pointed and have a V-shape. The young can be distinguished from the adults by the bright yellow stripes on the tail; adults have dark stripes on the tail.

The Bomford Risk Assessment Model1 provides a model of the risk to Australia of non-indigenous animals based on data collected for introduced species in Britain and the United States of America using parameters including taxonomy, climate matching, geographic range, and success of establishment elsewhere. The Bomford Risk Assessment Model classifies the American alligator as a ‘Serious’ establishment risk for Australia. An American alligator can survive in low temperature water for some time without displaying signs of discomfort. This adaptiveness is thought to be the reason why American alligators are widespread further north, in North America than the American crocodile.

Alligators travel very quickly in water and can also lunge short distances very quickly. Occasionally, domestic animals, including dogs, cats, and calves, are taken by American alligators. Alligators are also capable of killing humans: alligator bites are serious injuries due to the reptile’s sheer bite force and risk of infection. Even with medical treatment, an alligator bite may still result in a fatal infection.

The American alligator is considered an apex predator throughout its native range and its diet includes a wide variety of animals, including invertebrates, fish, birds, turtles, snakes, amphibians, and mammals. As they grow, American alligators gradually extend to larger prey and once an alligator reaches adulthood, any animal living in the water or coming to the water to drink is potential prey, due to the size and power of the alligator.

Both male and female American alligators reach sexual maturity when they are around 1.8 m in length with is attained at about 10 to 12 years. The female usually lays between 35 and 50 eggs and the females aggressively defend their young. Maturity is reached during the sixth year and they can live up to 50 years.

The American alligator has been bred for commercial operations including skin, meat and pet trade. In Australia the importation of live animals is controlled by the Environment Protection and Biodiversity Conservation Act 1999 (EPBC Act), and the Biosecurity Act 2015 (Cth). There are restrictions on the animals that can be imported into Australia. These restrictions have been established as a safeguard to protect Australia against exotic pests and diseases that are considered a threat to the Australian environment, economy and the wider community and to protect endangered species from uncontrolled trade which can lead to population decline and extinction of endangered species.

As a reflection of the biosecurity risks it presents, the American alligator is classified as a Prohibited Dealing under the Biosecurity Act 2015. It is an offence to keep this species unless authorised, for example under the Exhibited Animals Protection Act 1986 or Animal Research Act 1985.