A Cane Toad Biosecurity Zone has been established in NSW to help in slowing the spread and further establishment of cane toads in NSW. See brochure for details.

Origin and introduction to Australia

The cane toad (Rhinella marina) originates from the southern United States and tropical South America. Cane toads were introduced to Australia as part of a biological control program for beetle pests of sugar cane. Intentional cane toad releases occurred in northern Queensland and northern NSW however the species has now spread across Queensland, the Northern Territory, Western Australia as well as further into New South Wales.

Cane toads are considered a serious non-native invasive pest in NSW. The species has the ability to cause devastating impacts on our communities, native wildlife and ecosystems due to their ability to spread to new areas, use limited natural resources and to poison animals that try to eat them.

Cane toads can be accidentally transported to new locations, for example in freight, green waste and loads of timber etc. People travelling from cane toad infested areas such as the Pacific Islands, Queensland, Northern Territory and north eastern NSW should pay attention to ensure they are not carrying a ‘hitchhiker’ cane toad in their luggage, equipment, vehicle or trailer.

There is no broadscale method to control the cane toad. However, maintaining awareness of cane toads, reporting their presence and managing them responsibly when detected will help in slowing the spread and further establishment of cane toads in NSW. The Cane Toad Biosecurity Zone incorporates all areas of NSW except a portion of the north east of the state where surveys indicate that cane toads have established endemic populations.

This map shows three areas of NSW along with guidance on the management and reporting of cane toads in each area. The Cane Toad Biosecurity Zone consists of the Buffer areas and Cane toad free area. To help with determining which of the three areas a specific address is located in, the map has an address search function.

If you think you have seen a cane toad:

Cane toads are large heavily-built amphibians with dry warty skin. They have a bony head and over their eyes are bony ridges that meet above the nose. They sit upright and move in short rapid hops. Their hind feet have leathery webbing between the toes and their front feet are unwebbed. Adult cane toads have large swellings - the parotoid glands - on each shoulder behind the eardrum.

Cane toads may be grey, yellowish, olive-brown or reddish-brown, and their bellies are pale with dark mottling. Average-sized adults are 10-15 cm long. The largest female measured in Queensland was 24 cm long and weighed 1.3 kg. Male cane toads are smaller and wartier than females. During the breeding season males develop dark lumps (nuptial pads) on their first two fingers; these help them cling to a female while mating. Their mating call is a long loud purring trill.

Cane toad tadpoles are shiny black on top and have a plain dark belly and a short thin tail. They are smaller (less than 3.5 cm long) than most native tadpoles and often gather in huge numbers in shallow water. Cane toad spawn is unique in Australia. It is laid in long strings of transparent jelly enclosing double rows of black eggs. The spawn tangles in dense dark masses around water plants, and hangs in ropy strands if picked up. Source: Office of Environment and Heritage

Find out how to tell the difference between a cane toad and a native frog.

These native frogs are often mistaken for cane toads in NSW: 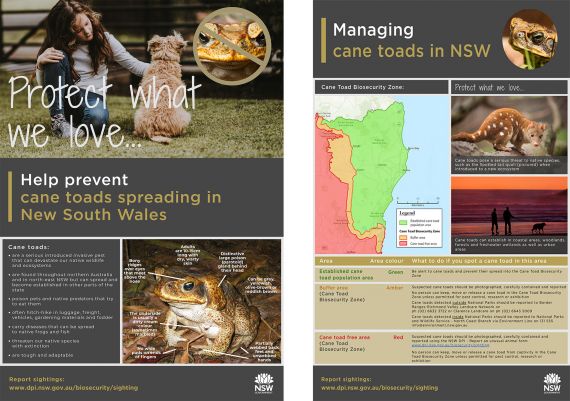 The cane toad is tough and adaptable as well as being poisonous throughout its life cycle. It has few predators in Australia, which is bad news for competing native amphibians, and it may be responsible for the population decline of the few snakes and other species that do prey on it.

Cane toads were deliberately introduced from Hawaii to Australia in 1935 to control scarab beetles that were pests of sugar cane. Since then, the range of cane toads has expanded through Australia’s northern landscape and they are now moving westward at an estimated 40 to 60 km per year. In February 2009, cane toads crossed the Western Australian border with the Northern Territory (over 2000 km from the site they were released 74 years before). To the south, cane toads were introduced to Byron Bay in 1965 and then spread to Yamba and Port Macquarie on the north coast of NSW in 2003.

Cane toads are considered a pest in Australia because they:

Cane toads can be accidentally transported to new locations, for example in pot plants or loads of timber.

Cane toads eat almost anything they can swallow, including pet food, carrion and household scraps, but most of their food is living insects. Beetles, honey bees, ants, winged termites, crickets and bugs are eaten in abundance. Marine snails, smaller toads and native frogs, small snakes, and small mammals are occasionally eaten by cane toads. The tadpoles of cane toads eat algae and other aquatic plants which they rasp off with five rows of tiny peg-like teeth. They also filter organic matter from the water. Large tadpoles sometimes eat cane toad eggs.

Adult cane toads are active at night during the warm months of the year. During the day and in cold or dry weather they shelter in moist crevices and hollows, sometimes excavating depressions beneath logs, rocks and debris. They can survive the loss of up to 50% of their body water, and can survive temperatures ranging from 5ºC - 40ºC.

Cane toads are prolific breeders, requiring only a small pool of water of almost any nature.

Cane toads can breed in most still or slow-flowing water, and tolerate salinity levels up to 15%. Male cane toads start calling for mates after the first summer storms (in Australia that is about September) or when water temperatures reach 25º C. The choruses peak in January and finish by March. The males congregate after dark around shallow water and mount females as they arrive at the water's edge. The male grips the female in the armpits (this is called axillary amplexus) and she releases her eggs, which are fertilised externally by the male's sperm.

Females lay 8,000 to 35,000 eggs at a time and may produce two clutches a year although only a small proportion of young survive to adulthood. The eggs hatch within 24-72 hours and the tadpole stage may last from 3-20 weeks, depending on food supply and water temperature - generally a range of 25-30ºC is needed for healthy development. The tadpoles gradually change (metamorphose) into toadlets 1-1.5 cm in length that leave the water and congregate in large numbers.

Under clause 44H of the Biosecurity Regulation 2019, a biosecurity zone known as the Cane Toad Biosecurity Zone is established for all land within NSW other than the following land:

Note. Section 12(2) of the Act deems an occupier of land to have possession of any biosecurity matter or carrier (including animals) on that land in certain circumstances.

Information on the management of cane toads in national parks can be found at the NSW Environment, Energy and Science.