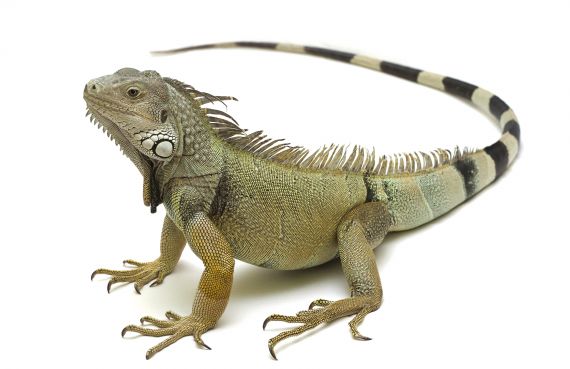 Green iguanas are native to Central and South America but have been taken from these areas to breed and sell through the international pet trade. Escaped and intentionally released Green iguanas have since established in a number of locations.

* spines running from neck to tail (in adults)

* a set of large scales on each side of the head

Adult iguanas are large, powerful animals. When threatened they can bite, cause severe scratch wounds and deliver a painful slap with their tail. Iguanas normally avoid people but will defend themselves against dogs and cats and people who try to catch them or corner them

Breeding starts when animals are three to four years old. Females lay clutches of 20–70 eggs once each year during a synchronised nesting period. Eggs are laid into burrows dug into the ground to a depth of 0.5–1 m. Females do not protect their eggs or offspring, but will defend their nest burrow during excavation. Eggs hatch after 90–120 days. Hatchlings are generally 17–25 cm long. Growth is relatively rapid and a 12 g hatchling can grow to 1 kg in three years. Juveniles are similar in appearance to adults but lack dorsal spines. Juveniles remain in family groups for the first year of life. Captive-reared animals can live for over 20 years, but wild animals generally live for about eight years. Individuals generally become reproductive at three to four years of age. Females remain reproductive for several years. Peak breeding occurs in the dry season, ensuring that most young hatch in the wet season when food resources are most abundant. Females can store sperm for several years after mating, using it to fertilise eggs at a later date.

Green iguanas are not listed as ‘specimens taken to be suitable for live import’ under the Environment Protection and Biodiversity Conservation Act 1999 (Cth). This means that they cannot be imported into Australia. As a reflection of the biosecurity risks these species present, Green iguanas are classified as Prohibited Dealings under the Biosecurity Act 2015 (NSW). It is an offence to keep this species in NSW unless authorised, for example under the Exhibited Animals Protection Act 1986 (NSW) or Animal Research Act 1985 (NSW).