The National Livestock Identification System (NLIS) Pigs is Australia’s system for identifying and tracing pigs.  It is a mob-based system that links pigs with the properties on which they have run.

The NLIS enhances Australia's ability to quickly contain a major food safety or disease incident. It is implemented by industry in partnership with governments across Australia.

Previously tracing of pigs was possible using the combination of swine brands, movement documents and the keeping of records. But from 1 February 2018 additional NLIS requirements were introduced in NSW and other states:

Under the NSW Biosecurity (NLIS) Regulation 2017, all pigs (including pet pigs, pigs raised for personal use and very small pigs) moving off a property must be permanently identified with  either a swine brand (pigs>25 kg) or NLIS accredited ear tag, identifying the PIC of the property the pigs have moved from.  Pigs weighing less than 25kg live-weight must be ear-tagged and not branded.  It is preferable that pigs greater than 25kg are branded, although ear tags are an option if a brand is not available. 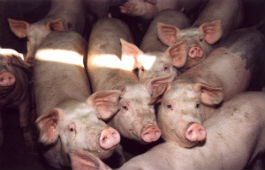 PigPass is a national tracking system which provides real time information on the movements of all pigs in Australia.