Black-striped mussels are a small marine bivalve mollusc originating from Central and South America. They have spread to several countries in the Indo-Pacific region, and are considered a serious pest because of their ability to rapidly establish huge populations and cause significant environmental and economic impacts.

There are no existing populations of black-striped mussels in NSW waters. However, in 1999 they were discovered in several enclosed marinas in Darwin Harbour and successfully eradicated.

Black-striped mussels may easily be introduced into Australian waters by vessels travelling from infected ports in other parts of the world. They tolerate a wide range of temperatures and salinities and have the potential to colonise much of the Australian coastline, including the NSW coastline down to and around Sydney. If they became established in NSW waters, these mussels could devastate the shellfish, fishing, tourism and other marine industries.

Black-striped mussels are native to tropical and sub-tropical parts of the western Atlantic Ocean and Caribbean, being found from the Gulf of Mexico to Columbia.

Description: These mussels are small (fingernail-sized), reaching a maximum size of around 25-28 mm. They have a smooth, transparent, pale shell, sometimes with zigzagged or longitudinal stripes.

Habitat: Black-striped mussels generally prefer sheltered inshore or estuarine habitats. They can tolerate a wide range of temperatures (5-40°C) and salinities (0-50 ppt). They are often found on vertical surfaces or in crevices, although they are capable of attaching to virtually any solid surface. They are also capable of detaching themselves and reattaching to new surfaces.

Reproduction and dispersal: Black-striped mussels are ambi-sexual, meaning they change sex at some stage during their lifecycle. At any particular time a certain proportion will have both male and female reproductive organs.

In the northern hemisphere they usually spawn in late autumn or early winter (October, November and December). Females can release tens of thousands of eggs, which are fertilised in the water column. These develop into pelagic (free-floating) larvae within a day and usually settle a few days later.
Black-striped mussels are very fast-growing, reaching about 8-10 mm within a month of settling, by which time they are mature. They reach their maximum size in about 6 months, and can live for up to 21 months although 12-13 months is more common.

Diet: Like other marine bivalves, black-striped mussels are filter-feeders, consuming plankton and other microscopic food particles which they filter out of the water.

Where are they in Australia? 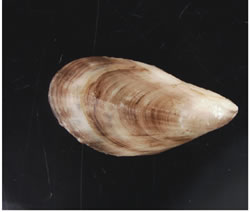 Black-striped mussels were first recorded in Australia in March 1999, when they were discovered in two Darwin marinas. Emergency containment (quarantine) measures were introduced, and large-scale chemical treatment (using chloride or copper sulphate) was carried out in infected areas. This was successful in eradicating existing infestations of the mussel, and to date there have been no further sightings.

However, they are believed to have the potential to colonise tropical and sub-tropical waters of northern Australia from Fremantle in Western Australia to Sydney in NSW, as well as the warmer parts of the Spencer and St Vincent Gulfs in South Australia.

They have already invaded ports in a number of other Indo-Pacific countries including India, Singapore, Taiwan, Japan, Hong Kong and possibly Fiji.

How did they get there?

Black-striped mussels were probably introduced into Darwin on the hull or in the seawater systems of a commercial or recreational vessel. There is also the potential for them to be transported as larvae in ballast water, although given their short larval stage this is a less likely route.

Once in an area, the mussels could also be spread by other means, such as the movement from one area to another of fouled aquaculture equipment. 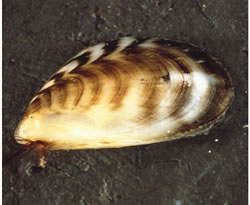 Black-striped mussels are closely related and ecologically similar to the notorious zebra mussel (Dreissena polymorpha), which has caused massive economic and ecological problems in the US.

Like zebra mussels, black-striped mussels can attach to any solid surface and are extremely prolific breeders. In suitable habitats they can establish dense beds (up to 10-15 cm thick), leading to massive fouling of all kinds of marine structures including hulls, chains, ropes, nets, wharves, marinas, mooring buoys, piles, floating pontoons and so on. They can also foul seawater inlet and outlet pipes (e.g. in mariculture pumping facilities and vessel ballast and cooling systems), reducing water flow. Hull fouling can cause increased drag and hence fuel costs, while infestations in engine cooling systems can cause overheating and damage.

Black-striped mussels are also able to settle on hard shell surfaces of other marine animals such as oysters and other mussels, causing major problems for shellfish growers. Dense mats of mussels have the effect of excluding most other species, leading to a substantial reduction in native biodiversity.

For these reasons, black-striped mussels are regarded as a significant pest with the potential to threaten the marine environment, fishing, aquaculture, tourism and port industries.

On the 1st July the NSW Government implemented a new Biosecurity Act 2015 (the Act). Under Schedule 2 of this Act the Black striped mussel is declared as prohibited matter in NSW. This means it is illegal to possess, buy, sell or move this pest in NSW. Heavy penalties apply for non-compliance. In addition, NSW DPI has the power to seize and require the destruction of the pest.

Fortunately, black-striped mussels do not yet appear to have become established in NSW. However, NSW DPI is concerned about the potential serious threat this species poses to our marine ecosystems, native animals and plants and mariculture industries.

Like many pests, if black-striped mussels were to become established in NSW their elimination would be extremely difficult and costly, if not impossible. For example, the containment and eradication program in Darwin cost over $2.2 million.

Following the infestation in Darwin in 1999, a National Black Striped Mussel Taskforce was established to coordinate work by State and Commonwealth agencies to track down and inspect vessels which visited infested areas in Darwin. NSW DPI continues to be involved in this and other national marine pest response programs, including the Australian Ballast Water Management Strategy and the Marine Pest Sectoral Committee (MPSC).

People are expected to have a basic level of knowledge about the biosecurity risks they might encounter in their normal work and recreational activities. All community members have a general biosecurity duty to consider how actions, or in some cases lack of action could have a negative impact on another person, business enterprise, animal or the environment. We must then take all reasonable and practical measures to prevent or minimise the potential impact.

There are several steps you can take to help prevent black-striped mussels and other marine pests from entering or spreading further in our waterways. For example:

If you find what you believe is a black-striped mussel (or another species which you suspect is not native to the area), freeze it whole and report it!