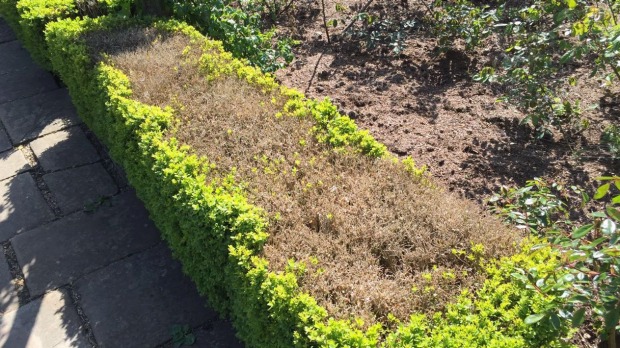 Buxus blight (caused by Calonectria pseudon aviculata) is not a notifiable plant disease in NSW.

However, if you suspect Buxus blight:

It causes dark or light brown lesions on box leaves (Figure 3). These lesions can cover the entire leaf. The leaves turn brown or straw colour before falling off the shrub. Dark brown or black fungal lesions also develop from the base of the infected plant stems. Severe defoliation causes dieback of infected box shrubs.

Buxus blight is a destructive fungal disease which has damaged European box garden hedges, topiary figures and groundcovers since the 1990’s. The blight is often fatal to young plants.

It is an easily dispersed, fast growing, rapidly reproducing and long-lived fungus. The dense foliage and compact growth habit often desired in ornamental box shrubs also favour the warm and humid conditions that encourage its development.

The fungal filaments grow into the box leaf stomata or penetrate the leaf surface.

The fungus does not need a wound to infect its host, but does require high humidity or free water. Fungal growth occurs between 5 and 30°C, with optimum growth around 25°C.

The Buxus blight fungus is asexual. It multiplies by fragmentation, budding or spore production.

During fragmentation a fungal filament separates into pieces, with each piece becoming a new filament. Budding occurs when cell division at a filament site produces a new outgrowth or bud, which then separates from the parent.

Spore production occurs when the fungal filaments produce stalks that contain spores. The dust-like spores may be produced on infected leaf surfaces seven days after the germination of the parent spore.

Buxus blight fungal spores are spread by water splash or through the movement of infected plants or cuttings. The sticky spores may also be dispersed by animals, birds, humans, clothing, footwear, garden implements and plant debris.

Buxus blight fungal spores and filaments can be carried internally or externally by plant leaves, stems, shoots, trunks and branches. The fungus may survive in decomposing leaves or in the soil for up to five years.

Buxus blight was first seen in the United Kingdom in 1994. It has since been reported in Asia, Europe, North America and Oceania.