The house mouse, Mus domesticus, originated near the present border of Iran and the former USSR. Mice quickly spread to Europe and subsequently throughout the world. They were probably introduced into Australia by the early settlers and, like most introduced animals, took an immediate liking to the country. With an ability to live on a wide range of foodstuffs, mice were able to accompany people as they explored and colonised.

The house mouse is not restricted to houses or buildings. They are found throughout NSW in almost all habitats and have adapted to a wide range of environmental conditions. More importantly, they are common on all agricultural lands and particularly cereal and summer cropping areas.

Mice are normally light brown to dark grey on the body, with a light cream belly. Adults have a body length of about 75 mm and weigh up to 30 g. The tail is about as long as the body and is almost hairless. In relation to their body, the ears are large and the eyes and feet are small. The long whiskers or vibrissae are very sensitive and are used as sensors when moving about in the dark. Mice have prominent incisor teeth that grow continuously: the length of the teeth is controlled by gnawing. Material may be gnawed yet not tasted or swallowed, so it is difficult to devise a repellent coating against mice. The house mouse is distinguished from Australian native mice by:

Mice consume a wide range of foods, eating 3 to 5 g daily. In a field situation, mice survive on the seeds of native grasses and thrive on introduced cereal grains. In food storage areas their diet can include cereals, other grains, vegetables, meat, fish, nuts, cheese and non-rancid animal products. They are attracted to foods such as rolled oats, peanut butter, vegetable oils, pumpkin seeds and molasses. When selecting a bait type, it is important to know that mice will sample all foodstuffs within their range, but may not return to a particular feed type for many days.

Mice can successfully live and breed without free water if the moisture content of the food is at least 15%. Where mice live in sheds and areas where the food supply has a low moisture content, they need 1 to 2 g of water daily to survive. In these situations their activity can be limited by cutting off their access to water.

Mice can start breeding at 6 to 10 weeks of age and produce 10 to 12 litters per year. The gestation period is 19 to 21 days, with the female re-mating almost immediately after giving birth. Young mice begin eating solid food at 11 days and are weaned at 21 days of age. They have a life span of 1 to 2 years.

Litter size is generally five or six but can be up to 10. The young are born hairless and blind in a nest of collected materials such as grass, paper, hair, cloth remnants or anything soft that is available.

If there is no infant mortality, one breeding pair of mice could theoretically produce 500 mice within 21 weeks.

In Australia, mice living under field conditions have a seasonal pattern of breeding. This generally begins in early spring and continues until cold or wet conditions develop in late autumn. Mice living in unfavourable seasonal conditions may have a shorter breeding period, while those with nests in the warmth of buildings or haystacks are likely to have an extended breeding period.

Mouse plagues tend to occur when there is plenty of food and water available, environmental temperatures are not extreme, soil is moist and easy to dig, nesting conditions are favourable and diseases, parasites and predation are at a low level.

Mouse plagues seem to be increasing in frequency, possibly because of changes in agricultural practice. There has been a marked increase in the number of crops grown under irrigation, as well as a change to follow-on summer/winter cropping. In some of the areas with available irrigation, it is not unusual to grow two summer crops that mature at different times and then follow with a winter cereal crop.

Mice are most active at night but can also be seen during the day, particularly around buildings or areas with adequate cover. Their home range is limited to an area of about 5 m2 in closed buildings, but in crop situations, with available food and water, the home range may be even less. Young mice are forced to seek new areas during periods of high breeding and this is one of the factors associated with the development of a plague.

When mice move, they tend to follow the same path from refuge to feeding area. Paths are often confined to walls, pipes or natural barriers, so the tell-tale smear marks can be an indication of mouse activity. In the field, distinct tracks through the vegetation become obvious.

Mice can swim and remain under water for lengthy periods. They can dig, jump upwards at least 30 cm, jump downwards at least 2.5 m without injury and squeeze through openings as small as 8 mm in width. In addition they can climb almost any rough surface, climb upside down and run down ropes and coated electric wires.

As with all pest species, predation may play a role until there is a rapid population build.up.

Predators are unlikely to have any effect on numbers when there is a mouse plague. A noticeable increase in the number of predators in an area may indicate a large increase in the mouse population.

In south-eastern Australia the main predators of mice are foxes, feral cats, snakes, falcons, owls, kites, kestrels, hawks and kookaburras. The presence of itinerant bird species such as the black-shouldered kite is a good indicator that mouse populations may be increasing.

Domestic cats have no impact on mouse populations, contrary to popular myth.

Although disease can cause a sudden decline in mouse numbers, marking the end of a mouse plague, declines in numbers occur mainly when mice are stressed from restricted food and shelter. It is more likely that over crowding will allow parasite infestations to develop and contribute to the spread of disease. A CSIRO research project is still trying to identify any disease or parasite occurring in mice that could be enhanced as a biological control agent.

Mice are commensal rodents, they live with humans, adapted to living in houses and buildings. Most farm buildings have a few mice. In the field, mice are always present but mostly in low numbers. Refuge areas such as channel banks and the more densely vegetated pastures are ideal habitat where detection is difficult. Poultry and pig sheds or grain storage facilities are also favoured, particularly if the soil can be excavated easily.

Mice cause damage to almost all sown crops, no matter whether they are winter or summer crops or seeds of cereal, oilseed, maize or pasture. By digging into the loose soil immediately after sowing they are able to establish nests and feed on the seed or newly emerging seedlings.

Most crops suffer damage prior to seedling emergence and when the grain or seed begins to mature. However, in cereal crops such as wheat, mice chew the growing nodes of the plant and can stop the development of the head or cause the stem to collapse.

In recent years there has been major mouse damage to wheat, oats, barley, soybean, maize, sunflower, sorghum, rice, lucerne and other legume seed crops, as well as to horticultural crops like melons, pumpkins and tomatoes.

Mice will be active in most farm areas where produce is stored. Normally, there may be little pressure put on such storage until there are mice in plague numbers that will test security to the limit. Mice can find the smallest hole and work on it until it is large enough to allow entry. During a plague it is difficult to maintain the mouse-free status of any facility unless there has been a mouse-proof component incorporated into the initial design and construction.

In machinery sheds mice can cause major damage to vehicle electrical wiring, upholstery and electric motors. Damage to plastic and rubber components, can cause machinery failure.

Mice may carry the following diseases and parasites,which are listed as potential human health problems in Australia (Caughley et al. 1998):

In particular, mice can transmit salmonella to one another, to humans and to domestic animals; encephalomyocarditis virus to pigs; fungal skin diseases (ringworms) to cats and humans; and leptospirosis to humans and domestic pigs.

In Australia, most of these pathogens are absent or rare. 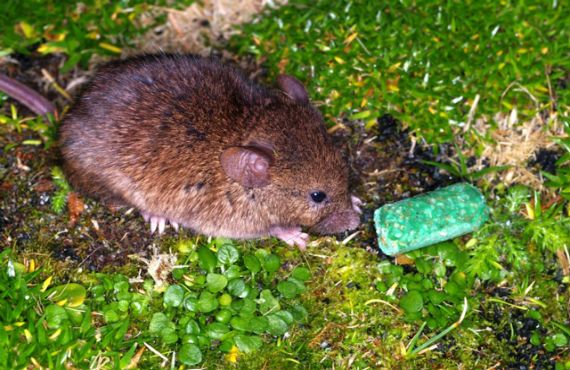