The male European blackbird is a uniformly black, medium-sized (25 centimetres head to tail) bird with a yellow to orange bill and eye-ring. The bill is almost red-orange in forested habitats. The tail is long and rounded, obvious in flight.

Females are dark brown with faint streaks on the chest and also have a duller yellow-brown bill. Juveniles are similar to females but have a tinge of rufous on the chest plumage. Blackbirds tend to be a shy species, spending much of their time close to cover either foraging in leaf litter, mulch or grass or in shrubbery. Movement across the ground is by jerky hops often followed by wing and tail flicks. They tend to fly fast but undulating and low to the ground when flushed to rapidly regain cover. Native of Europe, North Africa and southern Asia, the European blackbird is a member of the Muscicapidae family (true thrushes). It shares a genus with the song thrush (Turdus philomelos), which was also introduced to Australia in the late 1850s.

The European blackbird is common in most habitats of south-eastern Australia, displaying a preference for urban bushland, parks, gardens and horticultural areas. Unlike the song thrush, which is restricted to the urban areas of Melbourne, the European blackbird has colonised many types of natural habitat, including riverine vegetation, rainforest, wet sclerophyll, dry Eucalyptus woodlands, coastal heath and even mallee (e.g. Eucalyptus diversifolia, E. rugosa). Their distribution continues to expand, particularly along the Murray-Darling river systems to the north. Vegetated river systems in other areas are also thought to aid dispersal. Local densities are generally stable, although slight decreases are evident in suburban Canberra. Birds of this species often prefer areas with a combination of open or cleared pasture and a dense shrub layer.

The European blackbird is sedentary in Australia, with few movements greater than 10 kilometres recorded. They are known to be partial migrants in Europe, particularly in the northern extremes of their range. In Australia large movements of up to 500 kilometres can occur, but are likely to be made by juveniles dispersing after the breeding season. Solitary or in pairs, small territories are defended year round, but particularly during the breeding season. European blackbirds roost in the thick foliage of shrubs and trees, forage in open areas, shrubs and leaf litter during the day, and return to roost in the late afternoon.

Blackbirds predominantly rely on arthropods, including ground invertebrates, flying insects, earthworms, snails and spiders, but they also consume variable amounts of fruit, small reptiles and vegetable matter. Foraging mainly on the ground, they rake at leaf litter and probe open pasture and lawns in urban areas. European blackbirds are occasionally arboreal and consume native (for example Exocarpus cupressiformis) and cultivated (for example, olive, blackberry, grape, fig) fruits. European blackbirds are implicated in spreading some of these species into new areas. They vigorously defend territories and are aggressive towards other bird species, especially for several weeks leading up to, and during, their breeding season, but they are more tolerant during other times of the year.

Three to five pale blue-green eggs with reddish brown spots (34 × 23 millimetres) are laid in a large, deep bowl of dry grass, bark strips and leaves bound by mud. Nests are usually well concealed and suspended from less than one metre to as high as 12 metres, in the top of a stump or log or in an upright fork amongst bracken fern or other dense tree or shrub foliage. Eggs are incubated by the female for 12–14 days. European blackbirds continue to raise broods under ideal conditions, mostly from August to February. Nesting failure is often caused by predation, particularly by the pied currawong (Strepera graculina). Replacement clutches are usually laid — in one case five unsuccessful attempts were recorded during a season.

If fruit is available European blackbirds will consume it throughout the year. Grapes, cherries, peaches, nectarines, figs, olives and berries are particularly susceptible. Damage to vineyards and orchards is often associated with the presence of adjacent shrubs and dense garden plants. Hence damage is concentrated around these features. Small fruits, including grapes, cherries, olives and figs, are usually taken whole and consumed in nearby vegetation. Although sedentary, European blackbirds have been implicated in the spread of weed species including blackberries, olives and sweet pittosporum (Pittosporum undulatum). They also have the potential to compete with native bird species, including the closely related bassian thrush (Zoothera lunulata) and the grey shrike-thrush (Colluricincla harmonica). 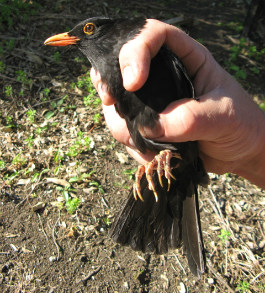