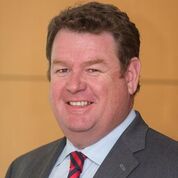 Khan was born and attended schooling at Grafton, Northern NSW. He has been General Manager of National Australia Bank’s (NAB) Agribusiness Division since 2007. In this capacity he leads a team of agribusiness bankers in 112 locations across Australia who specialise in agribusiness finance with a key focus on farm gate, post farm gate business and corporate agribusiness.

Khan’s career has been in agribusiness banking since he joined NAB in 1992 as a graduate at Gunnedah in Northern NSW. He is passionate about Australian Agribusiness and the role agriculture plays in the economy.

Apart from his banking role he remains involved in the family farm, a commercial Angus herd located at Grafton NSW.