When was QX found in Port Stephens?

QX was first confirmed in Sydney Rock Oysters in Port Stephens on 27 August 2021. Thanks to the diligence of farmers, we have been able to support industry in taking preparatory steps in response to QX disease, such as discussion of options for disease resistant spat.

When and where was QX reconfirmed in Port Stephens?

In February 2022, QX was reconfirmed in both the Karuah River and Tilligerry Creek growing regions following reports of unexplained mortalities and oysters showing clinical signs suggestive of QX disease. During a March 2022 surveillance sampling program run by DPI to determine presence / absence of QX in various regions of the Port, QX was again detected in multiple western growing areas. QX was detected in both wild and cultivated oysters across multiple size classes. The results of the surveillance sampling are summarised in the below map.

How will QX be managed in Port Stephens?

In August 2021, the QX status of Port Stephens was changed from a ‘low QX risk area’ to ‘under investigation.’ Following the February and March 2022 reconfirmations of QX disease in the estuary associated with high levels of mortality, DPI has analysed this data and some changes are being proposed to the Port Stephens QX risk classification.

Whilst there is active QX underway in Port Stephens, DPI is encouraging farmers to remain vigilant and call 1800 675 888 to report oyster mortalities as well as observations of diseased or unwell oysters.

Movements of oysters and oyster cultivation material within Port Stephens will not be restricted.

Outward movements of oysters and oyster cultivation material continues to be managed by the Biosecurity (QX Disease) Control Order 2021, which will remain in place whilst DPI works through the process to make recommendations for reclassification of the estuary under the QX Biosecurity Zone.

A map below shows the current QX risk status of all estuaries in NSW, also available on the DPI website. Sampling and testing in 2022

In February 2022, DPI reconfirmed QX through active investigation of reports of unexplained mortality in oysters analysed from Tilligerry Creek on 17 February 2022 and from Karuah River on 24 February 2022.

Surveillance testing in March was undertaken on a total of 300 oysters collected across 10 zones, to allow additional information to be obtained. QX was detected in cultivated oysters at 7 of the 10 zones tested. However, in 2 of the zones (Bundabah and Soldiers Point) QX was detected only in cultivated oysters that were known to have been moved in January from one of the other five locations testing positive for QX. It is therefore unknown where these oysters became infected with QX. Detection of QX disease in wild oysters was confirmed at 4 of the 10 zones tested (Upper Tilligerry, Lower Tilligerry, Upper Karuah and Oyster Cove).

A map depicting the sampling sites and results is included on the following page.

DPI is continuing discussions with funding bodies, seeking support for required research to help fill important information gaps for the longer-term management of this significant disease. Samples that were collected and processed as part of the initial surveillance have been stored for further analysis, such as molecular characterisation research into the potential for QX strain variation, if additional funding sources can be obtained. 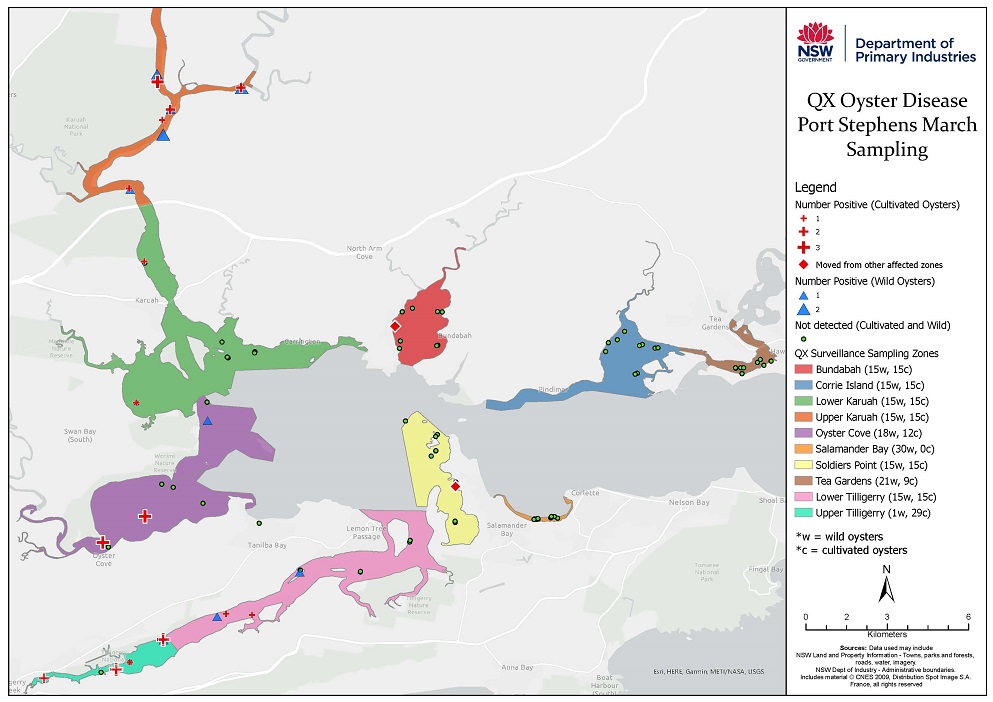 QX stands for ‘Queensland unknown’. It is a disease of Sydney Rock Oysters (Saccostrea glomerata) caused by a protozoan ('single-celled') parasite (Marteilia sydneyi). A closely related species, Marteilia refringens, causes 'Aber' disease in European flat oysters. This group of parasites is only known to infect invertebrate (animals without a backbone) hosts and does not have any implications for human health. Marteilia sydneyi is not a virus or bacteria.

Does QX impact other species of oyster?

Marteilia sydneyi has only been confirmed as a disease-causing agent, or pathogen, of the native Sydney Rock Oyster. Sydney Rock Oysters are the main species of oyster commercially farmed along the east coast of Australia, from the NSW/Victorian border north to the Great Sandy Strait in southern Queensland. Native Flat Oysters (Ostrea angasi) and the introduced Pacific Oyster (Crassostrea gigas; also known by Magallana gigas) are also farmed in some estuaries in NSW and are not known to be affected by QX.

How does QX affect oysters?

QX infection in Sydney Rock Oysters usually occurs in NSW where it is known to occur between January - April, with diseased oysters losing condition and dying through autumn and winter.

Marteliasydneyihas a lifecycle that involves at least two hosts and cannot be passed directly from one oyster to another.

The parasite enters the soft tissue of Sydney Rock Oyster through its gills and palps (near the oyster's mouth). If it progresses to cause disease, the parasite divides and proliferates. It then migrates to the digestive gland which surrounds the oyster intestine. There it undergoes further development and multiplication to produce spores (sporulation), the end-stage of infection in oysters. Sporulation damages the digestive gland of the oyster, resulting in starvation and eventual death of the oyster. Time from infection until death can vary between several weeks to several months. Affected oysters can be in poor condition and appear translucent or “watery”. The digestive gland can also appear to be a light tan colour instead of the usual dark brown. Prior to death of the oyster, the spores are released into the environment where they are taken up by alternate host(s) required in the life cycle of QX. The identity of the alternate host(s) has not been confirmed, but there is evidence suggesting that a polychaete worm (Nephtys australiensis) could play a role as a host in the development of the parasite. (Adlard and Nolan, 2015).

The expected duration of a QX disease outbreak cannot be accurately predicted. Observations made during QX disease outbreaks in other estuaries have found they can be prolonged with ongoing mortality likely to continue into early spring.

The pattern of mortality generally commences with a high mortality rate, tapering off until the disease event concludes.

Good field observations and record keeping of patterns of mortality and mortality estimates in stocks in Port Stephens estuary during this present disease event can provide valuable information as to when an outbreak may subside.

What causes outbreaks and how does QX spread?

Due to the complex multiple-host lifecycle of the QX parasite in open waterways where oysters are grown there are many factors that can influence QX outbreaks.

The short answer is that we don't fully know what drives disease outbreaks. However, major things to consider are:

It is important to note that the presence of Marteilia sydneyi alone does not necessarily result in outbreaks of QX disease. QX cannot be spread directly from one oyster to another.

The spores released by the oyster need to enter an intermediate host(s) for further development. However, infected oysters should not be moved to other waterways to avoid spreading the parasite to other areas where it may not yet be established and be causing disease.

For a summary of assistance options see: https://www.dpi.nsw.gov.au/emergencies/floods/natural-disaster-assistance-guide

A free Rural Financial Counsellors service is available as is wellbeing support.

Industry groups have also applied for Sector Development Grants under the (SFIRP) that will benefit the NSW oyster industry for preparedness and recovery from natural disasters and disease events. The 2022 Special Disaster Grant (up to $75K) and the Rural Landholders Grant (up to $25K) are available to eligible primary producers.

The DPI Sydney Rock Oyster breeding program has commercially available oyster families that have been bred to have greater than 70% survival through a QX disease event compared to non-selected (wild) oysters that can experience losses of up to 90% in a QX disease outbreak.

Further details regarding the overall performance of these families can be obtained from DPI Research Scientist Michael Dove (Email: michael.dove@dpi.nsw.gov.au, Phone: 02 4916 3807).

Some important considerations for restocking in a QX affected estuary are:

If you observe unexplained mortalities in your oysters, please call DPI Aquatic Biosecurity Risk Management Program on the Emergency Animal Disease Hotline on: 1800 675 888 or the Port Stephens Fisheries Institute switch on: (02) 4916 3900.

Where can I get further information?