QX stands for Queensland Unknown and can cause mortalities of Sydney Rock Oysters. The causative agent of QX, Marteilia sydneyi, was first identified in 1976 although the term QX has been in use since the 1960s when mortalities were first observed in cultivated oysters in south east Queensland when the cause was not yet known.

QX was detected for the first time in the Port Stephens estuary in August 2021. QX was confirmed through laboratory investigation of oysters sampled from the area after poor oyster growth was observed.

NSW DPI is continuing to investigate this outbreak, with further surveillance to be undertaken in Port Stephens in autumn 2022. The Biosecurity (QX Port Stephens) Control Order 2021 has been issued that places restrictions on oyster and cultivation equipment movements in to and out of the estuary whilst further investigations are underway.

Frequently asked questions have been produced for growers in the Port Stephens estuary.

QX  is a seasonally occurring disease of Sydney Rock Oysters (Saccostrea glomerata) known to have caused impacts in a number of estuaries in NSW. QX is caused by a protozoan ('single-celled') parasite (Marteilia sydneyi). A closely related species, Marteilia refringens, causes 'Aber' disease in European flat oysters. This group of parasites is only known to infect invertebrate (animals without backbone) hosts and does not have any impacts on human health.

QX does not have any impacts on human health and NSW Food Authority advises that all seafood in the market place remains safe to eat.

Does QX affect any other species of oyster?

Marteiliasydneyihas only been confirmed to cause disease impacts to the native Sydney Rock Oyster, Saccostrea glomerata. The Sydney Rock Oyster is the main species of oyster commercially farmed along the east coast of Australia from the NSW/Victorian border north to the Great Sandy Strait in southern Queensland.

Native Flat Oysters (Ostrea angasi) and the introduced Pacific Oyster (Crassostrea gigas; also known by Magallana gigas), also farmed in some estuaries in NSW, are not known to be affected by QX.

How does QX affect oysters?

QX infection in Sydney Rock Oysters is seasonally occurring, usually between January - April, with affected oysters losing condition and dying through autumn and winter. While seasonal, infection dynamics are complex, and it is not always observed each year in those estuaries where it is known to occur. M. sydneyi has a lifecycle which involves at least two hosts, which means QX cannot be passed directly from one oyster to another (is not directly transmissible).

The parasite enters into the soft tissue of Sydney Rock Oyster through its gills and palps (near the oyster's mouth). If it progresses to cause disease, the parasite divides and proliferates. It then migrates to the digestive gland which surrounds the oyster’s stomach and intestine. There it undergoes further development and multiplication to produce spores (sporulation), the end-stage of infection in oysters. Sporulation damages the digestive gland of the oyster, resulting in starvation and eventual death of the oyster.

Time from infection until death can vary between several weeks to several months. Affected oysters can be in poor condition and appear translucent or “watery”. The digestive gland can also appear to be a light tan colour instead of the usual dark brown.

Prior to death of the oyster, the spores are released into the environment where they are taken up by alternate host(s) required in the life cycle of QX. The identity of the alternate host(s) has not been confirmed, but there is evidence suggesting that a polychaete worm (Nephtys australiensis) could play a role in the development of the parasite. (Adlard and Nolan, 2015).

The seasonal cycle of QX involves two or more hosts as illustrated below. 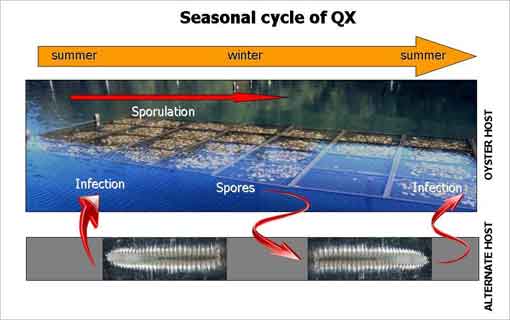 Individual spores of QX disease are microscopic and cannot be identified without the use of high power microscopes.

Signs of infection in oysters include:

It should be stressed that these gross signs are NOT specific to oysters with QX and can be the result of other environmental and nutritional conditions.

Diagnosis of the presence of QX

Diagnosis of QX disease should be undertaken only by laboratories skilled in disease recognition and that have the capacity and certification to undertake diagnostic tests. There are three methods that can be used: histology (microscopic examination of thin tissue sections); cytology (microscopic examination of stained tissue imprints); DNA-based tests (including polymerase chain reaction, or PCR, which tests for evidence of parasite DNA). The use of these tests is dependent on the stage of infection to be detected and the sensitivity of detection required, both of which have been assessed (FRDC funded projects FRDC2001/630, 2001/214). PCR proved to be the most sensitive, followed by cytology then histology However, PCR cannot differentiate between the sporulating stages of M. sydneyi and other life stages.

Where does QX occur?

In 1994 it was first diagnosed in the Georges River in Sydney and caused cessation of oyster farming over the following years. A small remnant of the industry returned to the Georges River to farm Sydney Rock Oysters but avoid areas still affected by this disease. In 2004 the Hawkesbury River suffered its first recorded outbreak of QX with massive stock losses, initially mostly on upriver leases, but by 2005 QX caused significant impact on oyster leases downstream too.

A major surveillance program of the east coast growing areas funded by the FRDC and conducted by staff at the Queensland Museum and NSW DPI, was undertaken between 2001 and 2004.  As a result of that work, molecular genetic (DNA) evidence suggests Marteilia sydneyi could be far more widespread than previously thought. DNA evidence consistent with Marteilia sydneyi has been found from as far south as the NSW/Victorian border through to northern Moreton Bay in Queensland.

Due to the complex multiple-host lifecycle of the QX parasite in open waterways where oysters are grown there are many factors that can influence development of QX outbreaks.

The short answer is that we don't fully know what drives disease outbreaks, However, major things to consider are:

It is important to note that the presence alone of Marteilia sydneyi does not necessarily result in outbreaks of QX.

Management and reporting of QX

Any unexplained and significant mortality of oysters should be reported to the appropriate authorities. Management in place in New South Wales to minimise the risks associated with this serious oyster pathogen includes the QX biosecurity zone under Part 3 of the Biosecurity Regulation 2017.

The QX biosecurity zone uses a risk-based approach to managing QX, that captures all of NSW in the QX Biosecurity Zone. The current biosecurity zone places NSW estuaries into categories known as QX Risk Areas according to their risk:

The status of Port Stephens is currently under investigation with the Biosecurity (QX Port Stephens) Control Order restricting movements of oysters and oyster cultivation equipment. For the purposes of inwards movements to Port Stephens, permissible movements are restricted to those applying to low risk QX estuaries. The movement of equipment out of high and medium QX risk areas is permitted only if it has been treated in accordance in the provisions of the Biosecurity Order Permitted Activities.

Can cultivated oysters be moved under the biosecurity zone?

Oysters can me moved from Brunswick River to Georges River as this is going from a medium QX risk to high QX risk ranked estuary.

Information on biosecurity zones relating to QX, Sydney Rock Oysters and Pacific Oysters can be found on the Biosecurity Regulation 2017 webpage.

Under Division 3 Clause 10 of the Fisheries Management (Aquaculture) Regulation 2017, all oyster movement in NSW must be documented in the Oyster Shipment Log Book system.