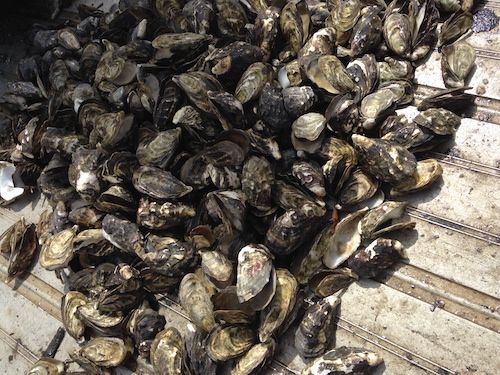 POMS is caused by a virus known as Ostreid herpesvirus -1 microvariant (OsHV-1 µvar). This virus affects Pacific Oysters and does not affect the Sydney Rock Oyster (Saccostrea glomerata) or the Flat Oyster (Ostrea angasi). There are no human health or food safety concerns with POMS, it cannot be transmitted to humans. Consumers can be confident of the quality of oysters in the marketplace.

Pacific Oysters affected by POMS experience rapid and mass mortality. Mortality of up to 100% can be experienced in cultivated oysters within days of infection. The highest mortalities (between 60%-100%) occur in juvenile oysters (3-6 months in age), however all life stages have been recorded as susceptible. Where does POMS occur?

The first reported POMS mortality outbreak was in France in 2008. Since then, POMS has been detected in the United Kingdom, Ireland, the Netherlands, Spain, Italy, Asia, New Zealand and Australia.

POMS was first confirmed in Australia in NSW in November 2010. In January 2016, oyster mortalities confirmed to be caused by POMS occurred in Tasmania. In February 2018, POMS was confirmed in the Port River of South Australia.

Immediate reporting of these mortalities resulted in rapid action by NSW DPI to investigate the cause and implement controls on the movement of oysters and oyster cultivation equipment from these areas to help prevent further spread of the disease. 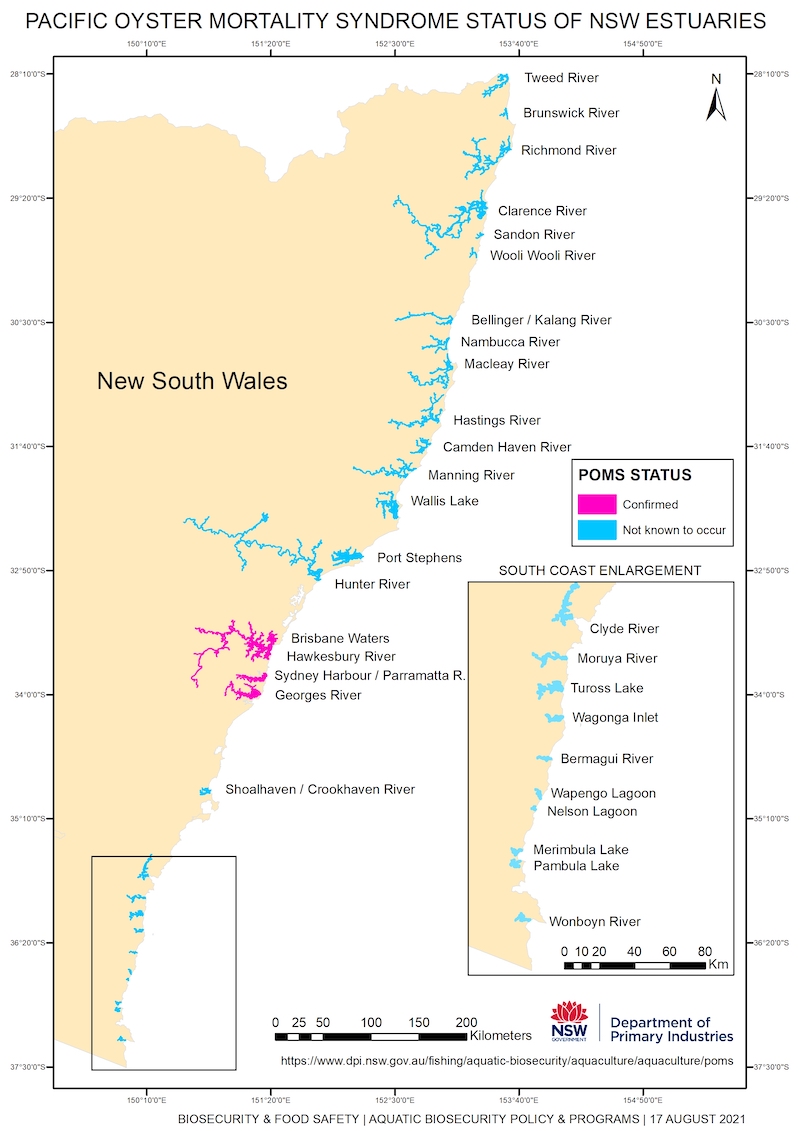 POMS is a seasonal disease where clinical infection and mortality is most prevalent during the summer months. Once POMS is introduced to an estuary system, impacts generally persist on an annual basis. In NSW, mortality occurs once water temperatures reach and sustain a minimum 21°C, although in Europe, a lower threshold temperature of 16°C has been reported. Studies in Europe found that POMS was detectable in oysters after mortalities ceased, which indicates that surviving oysters can act as carriers of the virus. At this stage, there is still a lot to be learned about the lifecycle of this virus.

Any unexplained or significant mortality of wild or cultivated oysters should be reported to NSW DPI. POMS is a notifiable disease and if suspected, must be reported to NSW DPI. Oyster growers are required to report unexplained mortality by aquaculture permit conditions. Collect as much information as possible, including any photographs of the mortality, an estimate of how much mortality is occurring, when the mortality was first seen, the waterway, nearest town and any other identifying features.

NSW DPI can investigate the mortality event. If required, NSW DPI can coordinate the submission of samples to the State Veterinary Diagnostic Laboratory at NSW DPI Elizabeth Macarthur Agricultural Institute to exclude or confirm disease.

Management is in place in NSW to minimise the risk of further spread of POMS.

NSW DPI has established a POMS Biosecurity Zone under the NSW Biosecurity Regulation 2019. In this zone, POMS affected areas are described and restrictions apply on the movement of oysters and oyster cultivation equipment. Oysters and equipment may only be moved between affected areas. The movement of oysters from affected areas to any other unaffected NSW waterway is not permitted. Oyster cultivation equipment may only be moved to other unaffected POMS waterways if it has been treated in accordance with strict biosecurity measures.

Strict biosecurity measures are described in the Biosecurity Order (Permitted Activities) 2019. These must be followed to allow for oyster cultivation and research equipment that has been used in POMS affected areas to be cleaned and decontaminated before it can be safely used in other unaffected waterways.

The Biosecurity (Pacific Oyster Mortality Syndrome) Control Order 2021 is in force. This control order provides restrictions on the importation to NSW of oysters and oyster cultivation equipment originating from Tasmania, to reduce the risk of spread of POMS from infected areas of Tasmania into unaffected areas of NSW.

A procedure has been developed that outlines the management actions and legislative provisions that may be used in response to suspected or confirmed outbreaks of POMS in NSW waterways where POMS has not previously been known to occur.

POMS disease resistant Pacific Oyster broodstock are held in Tasmania. Following the outbreak of POMS in Tasmania in February 2016, the initial NSW Control Order restricted access to products produced using these broodstock, with the exception of movement into POMS affected estuaries under a specific protocol.

Since that time, NSW DPI has worked with the oyster industry and the Tasmanian Government to support access to Tasmanian oyster spat through implementation of strict biosecurity protocols so that they could be safely imported into and cultivated in NSW POMS unaffected estuaries.

In 2018, NSW DPI worked with Pacific Oyster growers in the POMS unaffected estuaries of the Clyde River and Shoalhaven/Crookhaven rivers to address a shortfall of available spat (juvenile oysters) for cultivation, due to the Control Order restrictions. Following an independently led comprehensive risk analysis relating to the risks and risk mitigation options available, NSW DPI was able to develop a protocol to provide access to stock from Tasmania for these estuaries and safeguard the NSW industry against introduction of POMS into unaffected areas.

On 27 August 2021, an updated Control Order was published in the NSW Government Gazette to revoke the temporary movement restrictions on the Clyde and Shoalhaven/Crookhaven rivers, returning these estuaries to normal business.

NSW DPI encourages anybody that observes suspected aquatic disease events to report them so they can be investigated. Fish Care Volunteers, recreational fishers and community groups can assist by reporting any observed mortality outbreaks in wild Pacific Oyster populations.

Cleaning boats, trailers, kayaks fishing gear and other equipment before moving to another waterway can greatly help reduce the spread of aquatic diseases and pests. Read how via this aquatic hygiene factsheet and Make 'clean' part of your routine.