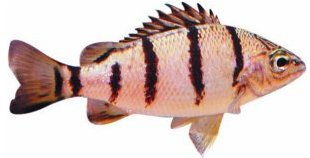 Banded grunter are widespread in northern Australia where they are an important part of the native fish fauna. However, they have little value as either a sport or table fish and are considered a pest outside their natural range.

While not native to the Murray Darling river system or coastal rivers in south-eastern Australia, the banded grunter is able to withstand a wide range of temperatures and has established populations in south-east Queensland and northern NSW.

Three major impoundments in south-eastern Queensland have suffered from the accidental introduction of this fish, including impacts upon some of Queensland's premier bass fisheries.

Banded grunter have also been detected in the Clarence River system in northern NSW. In NSW they have the potential to seriously damage aquatic ecosystems, affect other native fish species (including threatened species), and impact on recreational fisheries which support the economies of many local communities.

Like many freshwater pest fish, once populations of banded grunter have established, eradication is almost impossible. It is therefore vital to prevent noxious species such as banded grunter from entering or spreading further in our waterways.

Banded grunter are a small predatory fish native to northern Australia. Their natural distribution extends from the Burnett River near Bundaberg through northern Queensland, the Northern Territory, northern parts of Western Australia and into the Lake Eyre Basin.

They are distinctively patterned, with five vertical black stripes on a silver to bronze background, interspersed with small brown spots. They have been reported as growing up to 25cm in length but are more commonly around 8-12cm.

Banded grunter inhabit a wide range of freshwater habitats, from still ponds and isolated rock pools to fast flowing streams, and can be locally very abundant. They also tolerate a wide range of environmental conditions, from headwaters down to brackish water in the upper parts of estuaries, in muddy to clear waters, and over a variety of substrates.

Banded grunter are mainly carnivorous but have a varied diet that can include aquatic insects, small crustaceans, algae and aquatic plants.

They are an aggressive species which breeds prolifically. Females produce up to 400,000 eggs, and they appear to spawn over a wide variety of different habitats.

Currently the only confirmed population of banded grunter in NSW occurs in the Clarence River system, where they have been caught by anglers since early 1999. The NSW Rivers Survey, which covered all major river systems in the state in 1996, did not detect banded grunter at any of the locations sampled.

Banded grunter have probably been introduced to NSW through the stocking of aquaculture farms and farm dams with contaminated shipments of fish. They have been discovered in shipments of fingerlings from interstate hatcheries located in areas where the fish is naturally found. Other species not native to NSW have also been found in the same shipments.

Banded grunter have also been sold as aquarium fish. The release of unwanted pet fish is another way that this species could have been introduced into the wild in NSW.

On the 1st July the NSW Government implemented the new Biosecurity Act 2015 (the Act). Under this new legislation the banded grunter are declared a notifiable species in NSW under Part 2, Schedule 1 of the Biosecurity Regulation 2017 (the Regulation). Under Part 2, Division 5, Clause 18 of the Regulation it is illegal to possess, buy, sell or move this pest in NSW. Heavy penalties apply for non-compliance

The notifiable listing also provides DPI with the power to require their destruction. DPI will seek compliance with the notifiable species regulations for banded grunter, for example through inspections of farm dams, aquaculture facilities, fish shipments and through educational means.

NSW DPI is also involved in ongoing monitoring of fish populations in coastal and inland rivers in NSW as part of the Monitoring Evaluation and Reporting (coastal) and Sustainable Rivers Audit (inland) processes. If any new populations of banded grunter are discovered they will be monitored and, where possible, action taken to control or remove them.

People are expected to have a basic level of knowledge about the biosecurity risks they might encounter in their normal work and recreational activities. All community members have a general biosecurity duty to consider how actions, or in some cases lack of action could have a negative impact on another person, business enterprise, animal or the environment. We must then take all reasonable and practical measures to prevent or minimise the potential impact.