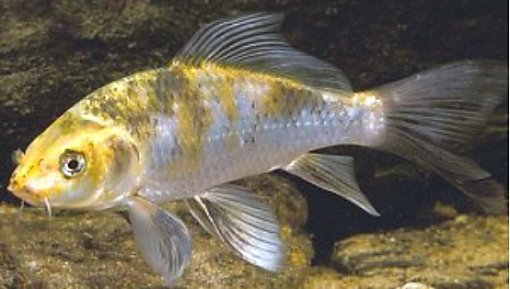 Carp are a large freshwater fish native to central Asia. Introductions in many countries have helped to make carp the most widely distributed freshwater fish in the world. They are extensively farmed in Europe, Asia and the Middle East, and are a popular angling fish in Europe. However, in North America, Canada and Australia, carp are considered a significant pest.

Carp are very versatile, and can live in a great variety of habitats including highly degraded areas. Over the past few decades carp have spread across most of south-eastern Australia. They are now the most abundant large freshwater fish in some areas, including most of the Murray-Darling Basin, and are thought to have contributed to the degradation of our natural aquatic ecosystems.

Although small carp can be mistaken for goldfish, carp can be distinguished by having a pair of barbels (whiskers) at each corner of their mouth. They have small eyes, thick lips, a forked tail and a single dorsal (top) fin with strongly serrated spines. The scales are large and thick.
The colour of carp varies. In the wild they are usually olive green to bronze or silvery in colour with a paler underside. Koi (or Japanese) carp are domesticated ornamental varieties of common carp and show a much broader range of colours and colour patterns, with various combinations of white, black, red, yellow, blue and orange markings. Scale variations, including large shiny scales either scattered or in a line along the flanks (‘mirror carp’) or an absence of scales (‘leather carp’) are also common in ornamental and wild fish.
All strains belong to the same species, Cyprinus carpio.

Carp can grow to a very large size, with overseas reports of fish as large as 1.2 metres in length weighing 60 kg. Fish of up to 10 kg have been caught in Australia, but weights of around 4-5 kg are more common.

Habitat: Carp are usually found in still or slowly flowing waters at low altitudes, especially in areas where there is abundant aquatic vegetation. They are also found in brackish lower reaches of some rivers and coastal lakes.

They are capable of tolerating a range of environmental conditions. They have a greater tolerance of low oxygen levels, pollutants and turbidity than most native fish, and are often associated with degraded habitats, including stagnant waters.

Changes to water flows, declining water quality and other changes to river habitats over the past few decades have negatively affected many native fish while favouring carp.

Reproduction: Under suitable conditions, carp are highly prolific. They mature early – as early as 1 year for males and 2 years for females – and the females produce large numbers of sticky eggs (up to 1.5 million for a 6kg fish).

Carp migrate to and from breeding grounds during the breeding season, sometimes travelling hundreds of kilometres.

Most eggs and larvae die before they reach adulthood, although more may survive if environmental conditions are suitable. Floods seem to provide especially favourable conditions for carp breeding as well as abundant food for juveniles. This may help explain why carp experienced such a population explosion during the large floods of the 1970s.

Feeding: Carp are omnivorous, and their diet varies depending on what is available. They consume a range of small food items such as molluscs, crustaceans, insect larvae and seeds. These food items are sucked up (along with mud and water) from the bottom and filtered out using the gill rakers.

They can also consume plant material and general organic matter, especially when other food sources are not available (during winter, for example).

Adult carp have no natural predators. Large predatory native fish, such as Murray cod, golden perch and bass, may consume juvenile carp, although it appears they are not a favoured prey item.

Where are carp in NSW?

The distribution of carp in NSW now includes most of the Murray-Darling Basin as well as many coastal river systems, particularly in the central section of NSW from the Hunter in the north to the Shoalhaven (including the Southern Highlands and Tablelands) in the south. Carp are now the most abundant fish species in many NSW rivers, accounting for 90% of the fish biomass (total weight of fish caught) in some areas of the Murray-Darling Basin.

Distribution of carp in NSW by catchment

How did carp get here?

Carp have been introduced into Australia both deliberately, in an attempt to imitate the European environment, and accidentally, through the escape of ornamental or aquaculture fish.

In Victoria, the stocking of carp began as early as 1859, but early stocking attempts were not successful. In NSW, the earliest known introductions occurred near Sydney in 1865. In the early 1900s, fingerlings were used to establish several wild populations of carp around Sydney, including in Prospect Reservoir (where they still persist).

The timing and mode of carp introductions into the Murray-Darling river system is unclear, though there are early records of some carp being translocated from Sydney, and a distinctive orange-coloured ‘Yanco’ strain became established in the Murrumbidgee in the early part of the 20th century. Whatever the source(s), carp have been established in the Basin since at least the 1920s, although for some time they remained fairly uncommon.

In the early 1960s a new strain was imported for aquaculture and reared at a fish farm in Boolarra. These carp were stocked into farm dams near Mildura and soon spread up the Murray and Darling Rivers, assisted by widespread flooding in the mid 1970s.

Since then, carp have since gone on to radiate very successfully throughout the Murray-Darling system, including in Queensland and South Australia as well as NSW and Victoria. They have also been found in Lakes Crescent and Sorrell in Tasmania.

Many NSW coastal catchments now also contain carp, often koi which have escaped from backyard ponds or been deliberately released.

The spread of carp may also have been assisted by anglers illegally using them for live bait or illegally stocking them to create new carp fisheries. The fact that a distinct strain, unrelated to nearby populations, has been found in two dams in the Murray-Darling Basin (Wyangala and Burrinjuck Dams) suggests human introduction from a separate source.

What are the impacts of carp?

Because of their adaptability, carp have been very successful in their colonisation of new environments.

Carp are widely believed to have detrimental effects on native aquatic plants, animals and general river health, particularly through their destructive feeding habits.

Carp are often found in degraded areas, although it is not clear whether they cause the degradation or are simply able to survive in degraded areas where native fish cannot, or where natives have otherwise been eliminated. While in some cases carp have probably been blamed for degradation that is actually the result of human activities, it is clear that carp can have major impacts.

Some of the probable impacts of carp are outlined below.

This in turn reduces light penetration, which can make it difficult for native fish that rely on sight to feed. Reduced light can also decrease plant growth, and suspended sediments can smother plants and clog fishes' gills.

The effects of carp on water quality are well documented; however, poor catchment management practices probably have a more substantial effect.

Erosion: Carp feeding habits can undermine river banks leading to the collapse of banks and vegetation.

Impacts on invertebrates: Juvenile carp feed mainly on zooplankton, but start consuming larger (macro-) invertebrates once they reach around 15 cm in length. There is strong evidence that carp impact on native invertebrates in still waters, but only anecdotal evidence for their impacts in running waters.

Impacts on aquatic plants: Carp have significant effects on native aquatic plants both through direct grazing and through uprooting plants while feeding, leading to a reduction in plant density and biomass. Soft-leaved, shallow-rooted and submerged plants are most likely to be affected.

Disease: In other parts of the world, carp have been associated with the distribution of a range of parasites and fungal, bacterial and viral diseases. However, there have been few disease outbreaks attributed to carp in Australia.

Reduction in native fish numbers: The effects of carp on native fish are not well understood. Negative impacts of carp are thought to include competition for food and habitats and effects on recruitment (population replenishment). However, many native species (such as golden perch, Murray cod, silver perch and freshwater catfish) had experienced well-documented declines even before carp became widespread.

The feeding methods of carp can uproot aquatic vegetation and muddy the water. Carp have been blamed for damaging freshwater habitats and causing decreases in light penetration, dissolved oxygen and plant material. These changes may have affected native fish.