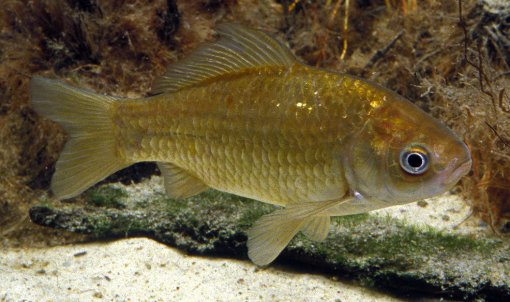 Goldfish were originally imported into NSW as a colourful and easy to maintain coldwater aquarium fish. Over many decades they have become widely distributed throughout lowland rivers.

Goldfish are related to carp (both from the Cyprinidae family) and feed mostly on small shellfish and plant material. They survive in still and sluggish water and can tolerate relatively high temperatures and low oxygen levels. Goldfish reproduce in summer. A large fish can lay several hundred eggs which hatch in about a week. Observations made by DPI research staff suggest that goldfish can be a food source for some predatory freshwater fish such as Murray cod. Goldfish are commonly up to 200 mm in size but can reach 400 mm.

Despite being related to carp, little is known about the impact goldfish have on native fish, particularly in regard to competition for food, resources and habitat. Few detrimental effects have been recorded, however, this may be due to limited research. One impact that has been well recorded is the transmission of disease.

Goldfish ulcer disease (GUD) is a bacterial disease first isolated from a goldfish farm in Victoria in 1974. Since then outbreaks have occurred at warm water fish hatcheries in NSW and Victoria. NSW DPI researchers have found that fingerlings of Murray cod, golden perch and silver perch are resistant to GUD. However, there has been one recorded outbreak of the disease in a silver perch fish farm in NSW. Trout are at high risk of infection.

What can we do?

Well-established introduced aquatic species are difficult to control. However, there are some options for pest fish management and improving the odds for native fish.

Management of issues such as water quality, environmental flows, fish passage and snags can maintain or return conditions to those that best suit native fish. This improves the ability of native fish to compete and creates conditions less suitable for introduced pest species. Protection and restoration of fish habitats through aquatic habitat rehabilitation can help to tip the balance in favour of native fish and away from introduced pest fish.

The spread of introduced pest species has often been associated with their use as bait. For this reason, use of live fish as bait is illegal in NSW. Improved education is also needed to avoid the accidental release of these species. NSW DPI has an extensive education program to promote community awareness of pest fish. See advisory brochure Don’t dump that fish!

If you find what you believe is a goldfish (or another species which you suspect is not native to the area), take a digital photo if possible or freeze it whole and Report it! to NSW DPI Aquatic Biosecurity.