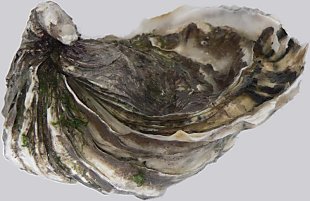 The Pacific Oyster (Crassostrea gigas) is endemic to Japan. It has been introduced into a large number of other countries outside its natural range including Australia. Most of these introductions have been for the purposes of aquaculture. Worldwide, Pacific Oysters are one of the most widely cultured shellfish species.

Pacific Oysters were first introduced into south-eastern and western Australian waters for aquaculture in the 1940s. In the 1980s they found their way into NSW waters, where they have spread and invaded intertidal habitats of many coastal waterways.

Pacific Oysters are a hardy species with fast growth and high reproductive rates. This has allowed them to establish dense populations in some areas, often displacing native intertidal species.

Pacific Oysters are declared a Class 2 Noxious Species in all NSW waters except Port Stephens. Since the 1990s Pacific Oysters have been the basis of an important aquaculture industry in Port Stephens, but elsewhere in NSW they have caused significant problems for oyster farmers who culture native Sydney Rock Oysters (Saccostrea glomerata). As the two species live and spawn in the same locations, Pacific Oysters can settle on and (due to their faster growth rate) smother farmed Sydney Rock Oysters.

Pacific Oysters are bivalve molluscs belonging to the family Ostreidae. They are native to northeast Asia (including Japan), but have been translocated and spread widely throughout many countries (including the UK, France, USA, Canada, Korea, China and New Zealand) for the purpose of aquaculture.

Pacific Oysters have a thin shell, with no hinge teeth inside the upper shell (unlike Sydney Rock Oysters). The adductor muscle (which holds the two shells together) is purple or brown in colour, whilst the edges of the mantle (the tissue which secretes and lines the shell) are black. Despite these distinct differences, it is difficult for the untrained eye to distinguish between the introduced Pacific Oyster and the native Sydney Rock Oyster.

Adult Pacific Oysters are sessile and can be found on a variety of hard substrates in the intertidal and shallow subtidal zones, to a depth of about 3 metres. They favour brackish waters in sheltered estuaries, although they tolerate a wide range of salinities and water quality and can also occur offshore.

Pacific Oysters have very high growth rates (they can grow to over 75 mm in their first 18 months) and high rates of reproduction.

Like most oyster species, Pacific Oysters change sex during their life, usually spawning first as a male and later as a female. Spawning is temperature dependent and generally occurs in the summer months. Female Pacific Oysters are highly fecund and can produce up to 40 million eggs per spawning, giving the surrounding water a milky appearance. Fertilisation takes place in the water column.

The larvae are planktonic and free swimming, developing for three to four weeks before finding a suitable clean hard surface to settle on. Although they usually attach to rocks, they can also settle in muddy or sandy areas (where they attach to small stones, shell fragments or other debris) or on top of other adult oysters. A very small percentage of oysters survive this phase; and once settled they are called "spat".

Pacific Oysters can live up to 10 years and reach an average size of 150-200 mm. Pacific Oysters are plankton feeders that filter minute marine algae and other microorganisms out of the water.

Although Pacific Oysters were not brought legally into NSW, it is suspected that small numbers were introduced deliberately and they formed small populations in some NSW estuaries. Once established, Pacific Oysters were spread to other areas, possibly in part by mixing with Sydney Rock Oysters that were moved between estuaries by oyster farmers.

Once established, Pacific Oysters are generally impossible to contain if environmental conditions are suitable. Their planktonic eggs and larvae facilitate natural dispersal, and this in combination with high fecundity allows rapid population extension.

Native Sydney Rock Oysters are a prized seafood species and are the main focus of oyster production in NSW, comprising 88% of total oyster production in NSW during 2012-2013 (NSW DPI, 2014). The spread of Pacific Oysters, and their ability to displace (or even smother) native species, is an ongoing and major concern for NSW oyster farmers who cultivate Sydney Rock Oysters.

This change in the species balance also has the potential to impact on non-oyster species, through a modification of habitat.

Pacific Oysters have been listed as a Class 2 Noxious Fish in all NSW waters except Port Stephens under the Fisheries Management Act 1994 (Schedule 6C). The possession and sale of Pacific Oysters may only occur under a specific permit issued by NSW DPI.

The Class 2 listing recognises that farming of Pacific Oysters is a major and well-established industry in Port Stephens, worth around $1.5 million annually (NSW DPI 2012-2013). 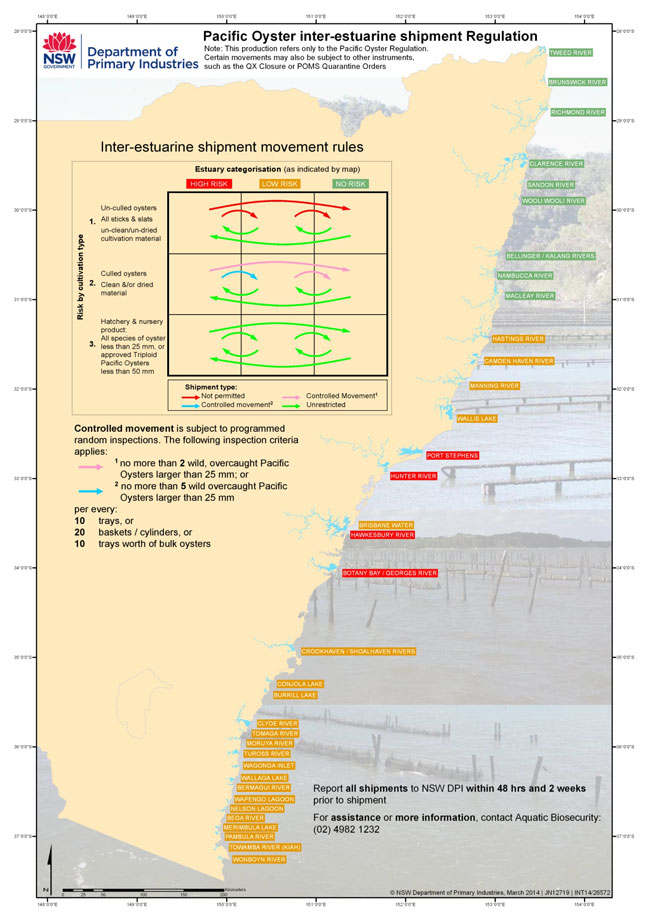 For more information on the Pacific Oyster Regulation and associated controls, please contact DPI Aquatic Biosecurity on (02) 4982 1232 or aquatic.pests@dpi.nsw.gov.au .

Like many aquatic pests, once Pacific Oysters are established it is extremely difficult, if not impossible to eradicate them.

Oyster farmers can assist in preventing the further spread of Pacific Oysters by complying with the current rules regarding the movement of oysters between estuaries.

There are several steps you can take to help prevent other marine pests from entering or spreading further in our waterways. For example:

If you find a new species that you suspect is not native to the area, freeze it whole as soon as possible and Report it!

Thomson JM. (1951). The acclimatisation and growth of the Pacific Oyster (Gryphaea gigas) in Australia. Australian Journal of Marine and Freshwater Research, 3-4: 65-73.

Zibrowius M. (1991). Ongoing modification of the Mediterranean marine fauna and flora by the establishment of exotic species. Mesogee, 51:83-107.