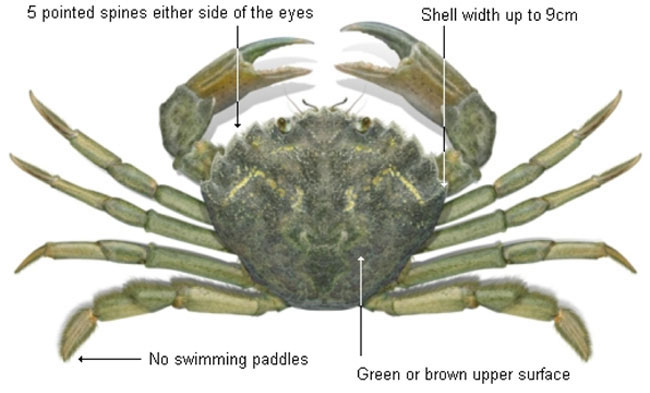 The European Green Crab, also known as the European Shore Crab or Green Shore Crab, is a medium sized crab with three blunt spines between the eyes (rostrum) and five pointed spines either side of the eyes. Adult specimens range in colour from olive to dark green, often with yellow or orange patches underneath. In contrast, juveniles generally display a light sandy colour. European Green Crabs have a broad triangular shaped shell averaging 5 to 6 cm in width but have been known to reach 9 cm. They do not have flattened swimming paddles on their rear legs.

The European Green Crab is native to the Atlantic Coast of Europe and northern Africa. However, this species has spread internationally to North America, Japan, South Africa and Australia. Records indicate that European Green Crabs were first documented in Australia in 1900 at Port Phillip Bay. It has since been found in Tasmania, Victoria, South Australia, Western Australia and New South Wales.

What impacts do they have? 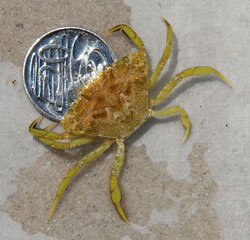 To date, no conclusive evidence has shown that European Green Crabs are affecting biodiversity in NSW.

The European Green Crab is thought to have been originally introduced to Victoria in the late 1800s via dry ballast in wooden ships. Much of its subsequent spread has probably been by natural dispersal in oceanic currents. Other possible domestic dispersal mechanisms include spread by boats and ships or accidental transportation within oyster farming equipment and infrastructure.

On the 1st July the NSW Government implemented the new Biosecurity Act 2015 (the Act). Under this new legislation the European Green Crab are declared a notifiable species in NSW under Part 2, Schedule 1 of the Biosecurity Regulation 2017 (the Regulation). Under Part 2, Division 5, Clause 18 of the Regulation it is illegal to possess, buy, sell or move this pest in NSW. Heavy penalties apply for non-compliance.

Eradication of an introduced species is nearly impossible once they become established. With this in mind, DPI is endeavouring to gain a better understanding of the distribution, abundance and potential impacts of the European Green Crab throughout NSW.

DPI developed a pest identification card for the European Green Crab that has been distributed to all oyster and mussel farmers as well as interested members of the public. This step has been taken to assist in identifying and differentiating between European Green Crab and similar native species. Additionally, oyster farmers have been asked to report any impacts upon production that they attribute to European Green Crab.

DPI has given support to local groups interested in reducing the numbers of this pest crab in localised areas of the south-coast. This support included a trapping program that was completed during 2010-2011 by the Sapphire Coast Marine Discovery Centre and the former Southern Rivers Catchment Management Authority (with Commonwealth Caring for our Country funding and the assistance of volunteers).

DPI continues to support projects that raise community awareness of European Green Crab as well as efforts that strive to determine if different types of oyster infrastructure are more effective in reducing crab presence.

DPI in collaboration with researchers at Macquarie University and Batemans Marine Park (in partnership with former Southern Rivers Catchment Management Authority, now Local Land Services, and the Sapphire Coast Marine Discovery Centre) has undertaken a study investigating the biology and ecology of European Green Crabs in Coastal lakes of southern NSW. It is anticipated that the findings of this report will be available in the near future.

People are expected to have a basic level of knowledge about the biosecurity risks they might encounter in their normal work and recreational activities. All community members have a general biosecurity duty to consider how actions, or in some cases lack of action could have a negative impact on another person, business enterprise, animal or the environment. We must then take all reasonable and practical measures to prevent or minimise the potential impact

Learn to recognise, and be aware of, the European Green Crab so that you can report a suspected sighting in a new location to DPI Aquatic Biosecurity. Please take good quality photos or collect a sample (freeze crab in plastic bag) and contact DPI Aquatic Biosecurity, including a description of where it was found and GPS points or a map if possible.

If you think you have visited an infested estuary, inspect your fishing and diving gear, boat and boat trailer. If you find any live crabs, please humanely dispatch and dispose of them in general waste away from the waterway.

When diving, fishing, or working in the aquatic environment, keep a look out for new introduced marine species.