Epizootic Haematopoietic Necrosis Virus (EHNV) an Australian iridovirus that is known to affect introduced wild populations of Redfin Perch and farmed Rainbow Trout. EHNV also has the potential to negatively impact several native fish species of the Murray Darling Basin. The EHN Virus enters fish through the body surface or gastrointestinal tract, multiplies in the blood forming organs such as the spleen and kidney and destroys them in the process. The liver is also affected by the virus. Most infected fish are believed to quickly succumb and die. EHNV poses no known threat to humans.

Identified, described and named in 1985, epizootic haematopoietic necrosis (which refers to the ability of this disease to cause destruction of blood forming organs in outbreaks involving many affected fish), was the first virus to cause outbreaks of mortality in Australian finfish. EHNV has been documented in portions of the upper Murrumbidgee catchment in NSW, the Broken River catchment in Victoria and the lower Murray Darling catchment in South Australia. Interestingly, after extensive testing and research, EHNV appears to be absent from the middle, western, and northern portions of the Murray Darling Basin.

What species of fish are susceptible?

Outbreaks of EHNV typically involve juvenile Redfin Perch and, to a lesser extent, farmed Rainbow Trout. However, native Silver Perch, Macquarie Perch, Murray-Darling Rainbowfish, Freshwater Catfish, Mountain Galaxias, and introduced Eastern Gambusia have shown susceptibility to EHNV infection in laboratory trials involving water borne exposure. Further, Murray Cod and Golden Perch have shown susceptibility to EHNV infection in laboratory intraperitoneal (abdominal cavity) injection trials. At present, Australian field studies have only detected EHNV infection in Redfin Perch and farmed Rainbow Trout. It is important to note that Redfin Perch have been recognized as a potential carrier of EHNV.  In fact, it is suspected that illegal movements of Redfin Perch by anglers may have played a part in the distribution of EHNV in the past.

Introduced species affected by EHNV include

Native species that may be affected by EHNV include

NSW DPI investigates reports of unusual mortality (i.e. fish kills) to determine possible causes of mortality, this includes excluding disease as a factor. Consideration is given to collection of samples for potential disease investigation any time observations of unusual fish deaths are made during monitoring activities. Management actions based on testing information are implemented as required.

You can help stop the spread of aquatic diseases!

EHNV has the potential to negatively impact native fish populations in NSW. At present, the reasons for its restricted distribution in the Murray Darling catchment are unknown. As such, actions designed to reduce the chance of spreading of the virus should be followed. For more information see Make 'Clean' part of your routine. 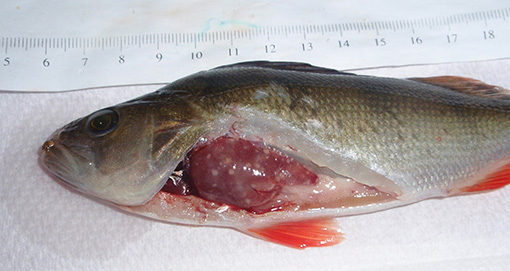 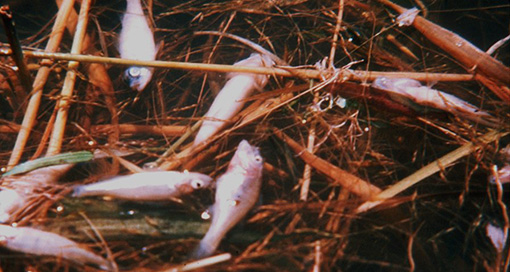