Epizootic ulcerative syndrome (EUS), or 'red spot disease', is a disease that can affect many species of fish. Red spot disease is known to be endemic in a number of waterways in NSW.

EUS is widespread in NSW coastal catchments and has been previously reported in many freshwater catchments and estuaries throughout Australia, including NSW, Queensland, Western Australia and the Northern Territory.

In 2008, reports of ulcerated fish and confirmation of this disease occurred in a number of estuaries including the Manning River, the Wisemans Ferry area of Hawkesbury River, and in Myall Lakes. EUS has also previously been reported from a number of mid-north coast and northern NSW estuaries including Clarence, Hastings, Hunter, Macleay, Port Stephens, Richmond, Tweed and Wallamba Rivers.

In addition to these coastal reports of red spot disease, fish sampled from inland waterways between Bourke and Brewarrina in the Darling River and Salt Creek on the Murray River, were also diagnosed with EUS between 2008 and 2011.

In 2022, the presence of EUS in samples submitted from the Myall River at Tea Gardens, Hastings River, and waterways near Grafton was confirmed following investigation of reports of ulcerated fish made to DPI.

Outbreaks of EUS have been associated with acid water run-off particularly after heavy rain and following a prolonged a dry spell, low salinity which may occur after ongoing rainfall and flooding, as well as other factors such as prolonged cold temperatures, crowding, and conditions associated with drought.

Healthy fish with no sign of EUS can still be caught and consumed by recreational fishers and caught and sold by licensed commercial fishers.

DPI monitors the occurrence EUS, as well as other aquatic diseases. Please report any suspected occurrences of EUS to DPI so that consideration can be given to taking of samples for disease investigation. 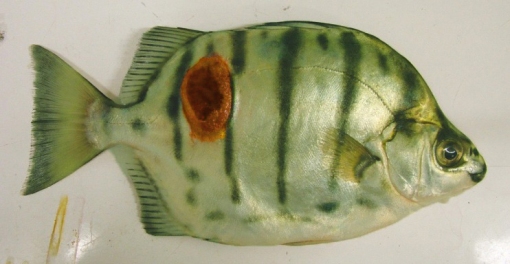