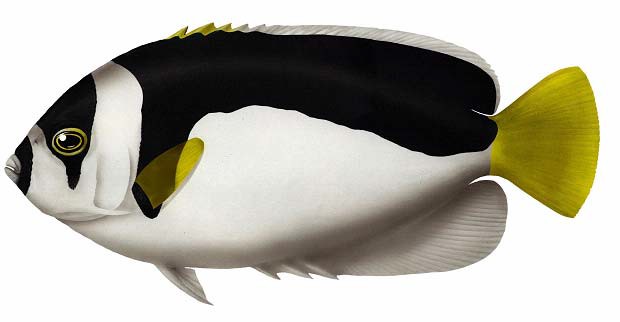 Ballina angelfish occur in northern NSW around Coffs Harbour, Ballina and North Solitary Islands, and around the Balls Pyramid area of Lord Howe Island. The species is found in deep water (at and often below the limits of scuba diving) in rocky regions such as seamounts.

Ballina angelfish are listed as a protected fish in NSW under the Fisheries Management Act 1994. Heavy penalties apply for taking or possessing them.

Ballina angelfish are distinctly coloured with a base of white overlaid by a black band running along the back. The tail and pectoral fins are bright yellow in colour. Scales are very small with rough edges. The species is known to grow to at least 20 cm long.

Why are Ballina angelfish protected?

What conservation actions are underway?

Taking or possessing Ballina angelfish (or any other species of protected fish) is an offence and heavy penalties apply. For corporations these penalties can include fines of up to $55 000 while individuals can face fines of up to $11 000 and up to 3 months in prison.