Some of the most decorative and elusive fish in NSW waters belong to the families 'Syngnathidae', 'Solenostomidae' and 'Pegasidae'. These unique and delicate groups of fish include seahorses, seadragons, pipefish, pipehorses, ghostpipefish and seamoths, known collectively as 'Syngnathiformes'. All species within these families are now protected under the NSW Fisheries Management Act 1994.

Syngnathiformes are not like most other bony fish. Instead of having internal bones for support and scales for protection, they have an elongated semi-flexible stiff body covered with bony plates and rings. The different species have a variety of specialised tubular snouts with a small mouth at the tip. These adaptations allow them to capture their preferred prey that usually consists of small crustaceans. These bizarre and wonderful creatures are mostly found in seagrass, coral reefs and mangrove habitats in tropical, subtropical and warm temperate habitats.

There are currently up to 31 syngnathids (seahorse, pipefish, pipehorse and seadragon), four solenostomids (ghostpipefish) and two species of pegasids (seamoths) that are known to exist in NSW waters. Three of these species, the White's seahorse Hippocampus whitei, Coleman's Seahorse Hippocampus colemani and the pygmy pipehorse Idiotropiscis sp, are endemic to NSW.

Syngnathiformes have become vulnerable to human impacts due to continued degradation of their habitats and increasing overseas demand for their use in traditional Chinese medicines and as tourist souvenirs. The ornamental live fish trade has similarly contributed to localised overfishing in some traditionally fished parts of Southeast Asia, especially the Philippines. A decline in seahorse populations in many Asian countries has led to increased pressure on local populations in Australia for trade purposes and hence the need for protection against commercial harvesting.

Syngnathiformes are distinct in appearance compared to their other bony fish relatives. There are many distinguishing morphological, behavioural and reproductive features that separate the seahorse, seadragon, pipefish, pipehorse, ghostpipefish and seamoth families.

Depending on the surrounding environment, syngnathiformes can be highly variable in colour and shape. Some syngnathiformes have the ability to change colour in minutes or to grow additional skin to mimic seagrasses and seaweeds they inhabit. This characteristic is a major defence and feeding strategy. Their small fins restrict them to slow movement giving them little opportunity to escape from predators, or to actively chase their prey when feeding.

The length of the snout varies among syngnathiform families, according to their preferred prey types. Those feeding on crawling type invertebrates from the sea floor generally have shorter snouts, while longer snouts are used for more intense suction to draw swimming crustaceans from the water column.

As of July 2004 all species of the families 'Syngnathidae', 'Solenostomidae' and 'Pegasidae' were listed as "protected" under the NSW Fisheries Management Act 1994. It is now an offence to have in your possession, collect or harvest any species of seahorse, seadragon, pipefish, pipehorse, ghostpipefish or seamoths in NSW without a permit.

The Environmental Protection and Biodiversity Conservation Act 1999 protects all syngnathids found in Commonwealth waters, making it is an offence to kill, injure, take, trade, move or export any members of the family without a Commonwealth approval permit.

In May 2004 the Parties to the Convention on International Trade in Endangered Species of Wild Fauna and Flora (CITES) listed the entire genus of 'Hippocampus' species (seahorses) under CITES Appendix II to improve the management of the international trade. Further consideration is being given to listing all syngnathids under the Convention.

Seven of the 47 syngnathid species listed in the 2000 IUCN (World Conservation Union) Red List of Threatened Species have been found in NSW waters. Most syngnathids are considered by the IUCN as vulnerable to impacts.

Seahorses have elongate bony bodies and long snouts. They swim slowly upright in the water, or wrap their tails around objects such as seagrass fronds to hold them in place for feeding or for stabilisation during turbulent water conditions such as storms. Seahorses use camouflage to blend in with their surroundings before using an ambush predatory feeding behaviour on small crustaceans. Seadragons are distinct from seahorses by their longer and unusually shaped bodies with spines and many leaf-like appendages. They have long tails that can't be bent and longer snouts than seahorses. The weedy seadragon Phyllopteryx taeniolatus is the only known seadragon in NSW waters. Weedy seadragons can be observed along reefs with kelp or along the edge of sand areas feeding on very small shrimp-like mysids and other small crustaceans. They grow up to 45cm long. 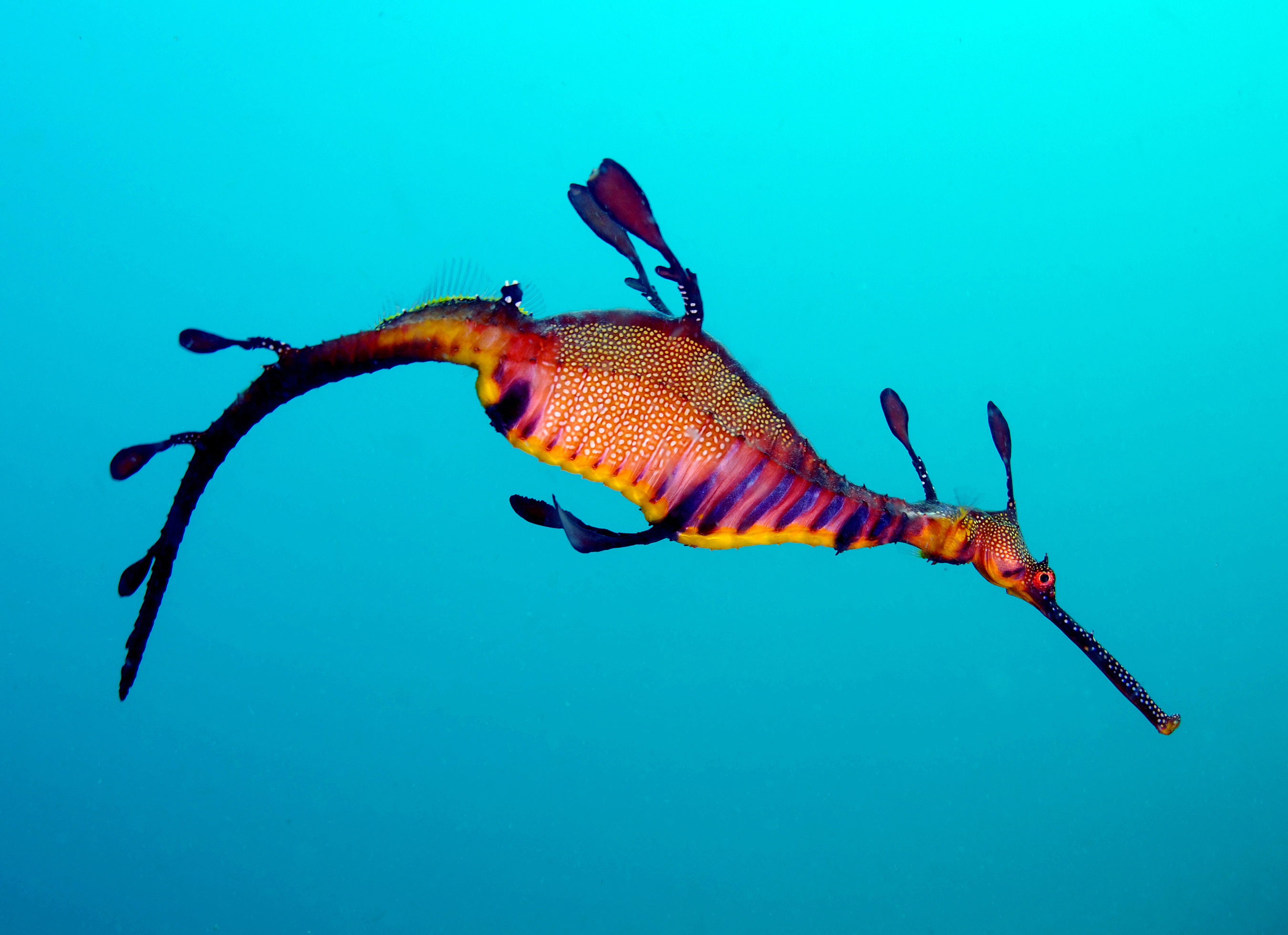 Pipefish look like straight-bodied seahorses with tiny mouths. A wide variety of body forms exist among this large family, where some have worm-like bodies that creep along the seafloor while others have stiff bodies and are free swimming. Most species of pipefish are less than 20cm in length and generally inhabit sheltered areas in coral reefs, seagrass beds and sandy lagoons. They use their tube-like mouth as a vacuum to draw in prey and some clean crustaceans from the scales of other fish.

There are 19 pipefish species known to inhabit NSW waters such as the Tiger pipefish Filicampus tigris that can be found in seagrass beds or sheltered reefs to depths of 15 metres. 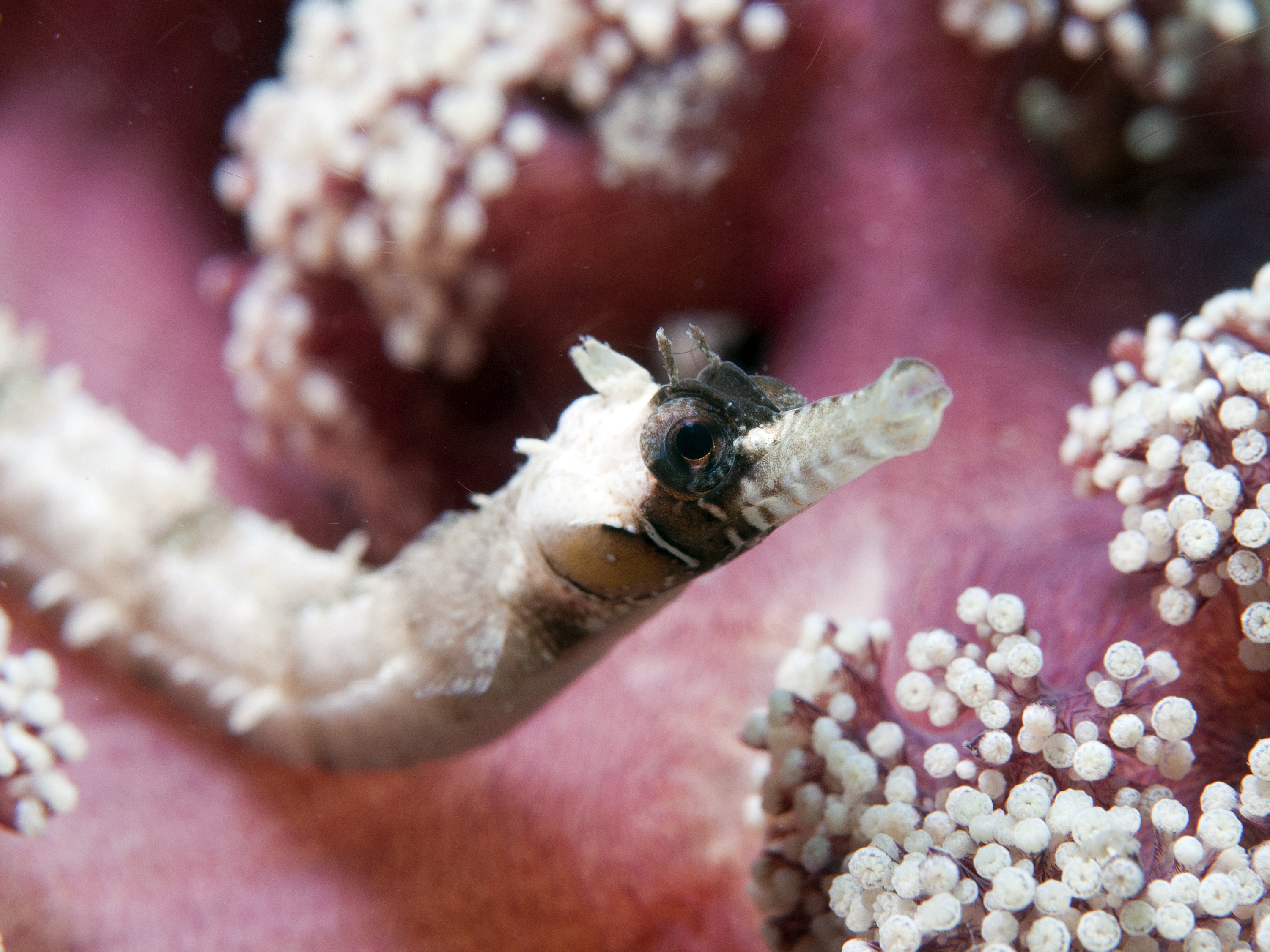 Pipehorses combine the features of both a seahorse and pipefish, with a head angled slightly towards its trunk and an elongated body with a curly, grasping tail. Some pipehorse species have special skin that supports the growth of algae similar to their surrounding environment. A pipehorse is able to camouflage very well and make a meal out of small crustaceans that feed on the algae. Pipehorses are found on soft bottoms near reefs or rubble in shallow to very deep waters, or amongst seagrasses. 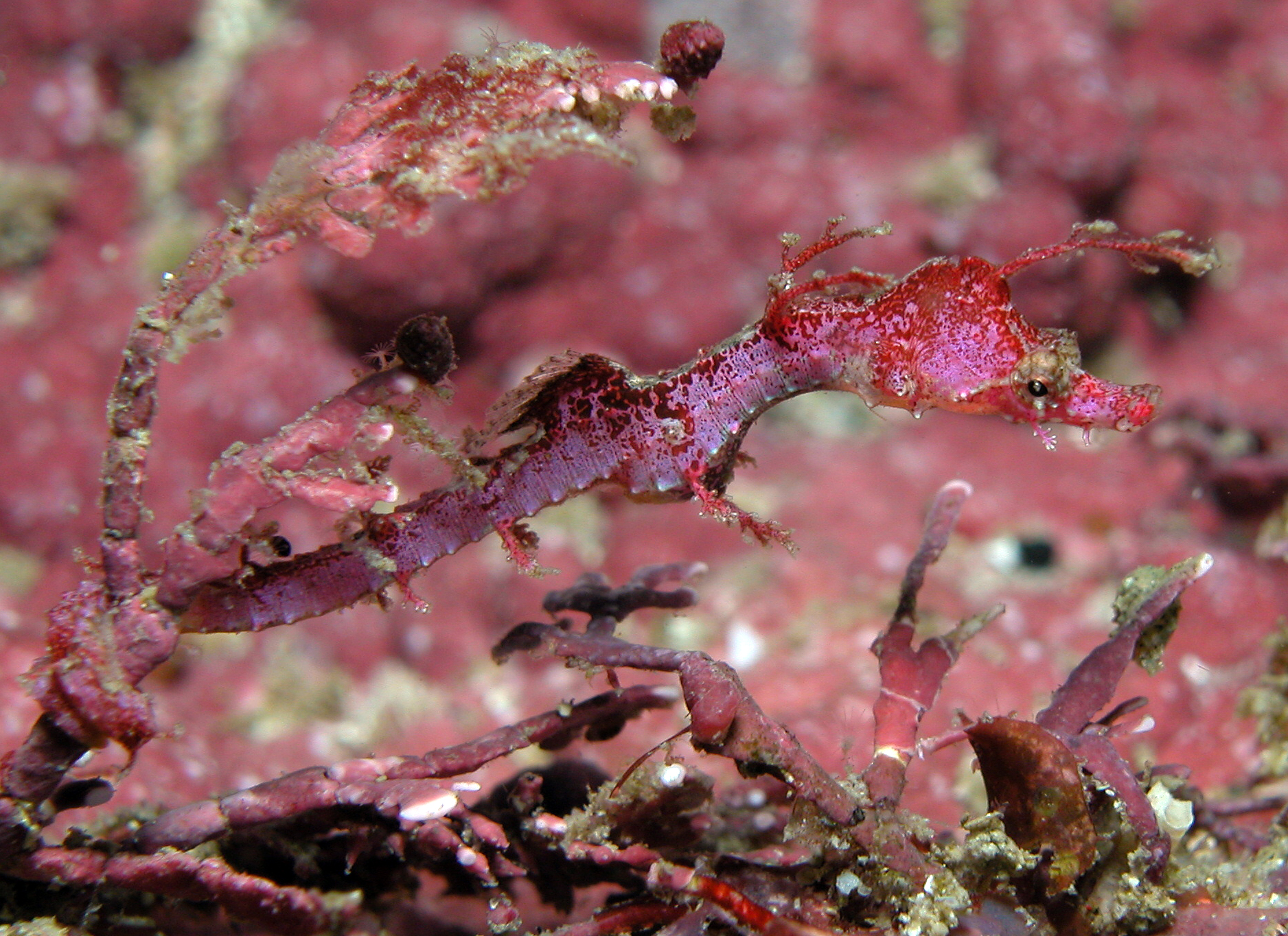 Ghostpipefish are closely related to the seahorse, seadragon, pipefish, and pipehorses but differ in that all ghostpipefish fins are well developed and large. Ghostpipefish are perhaps the most spectacular of the syngnathiformes in appearance, with some species, such as the Ornate Ghostpipefish Solenostomus paradoxus, displaying elaborate colours and bony spines. Other species such as the robust or rough snout ghostpipefish Solenostomus cyanopterus and S. paegnius, are less elaborate and adopt the colours of the algae or seagrasses with which they associate. These species are found in NSW in habitats ranging from muddy open bottoms to reefs with rich invertebrate life, usually in sheltered coastal or estuary waters. Ghostpipefish like seahorses and pipefish have an elongated snout that they use to feed on small shrimp-like crustaceans. 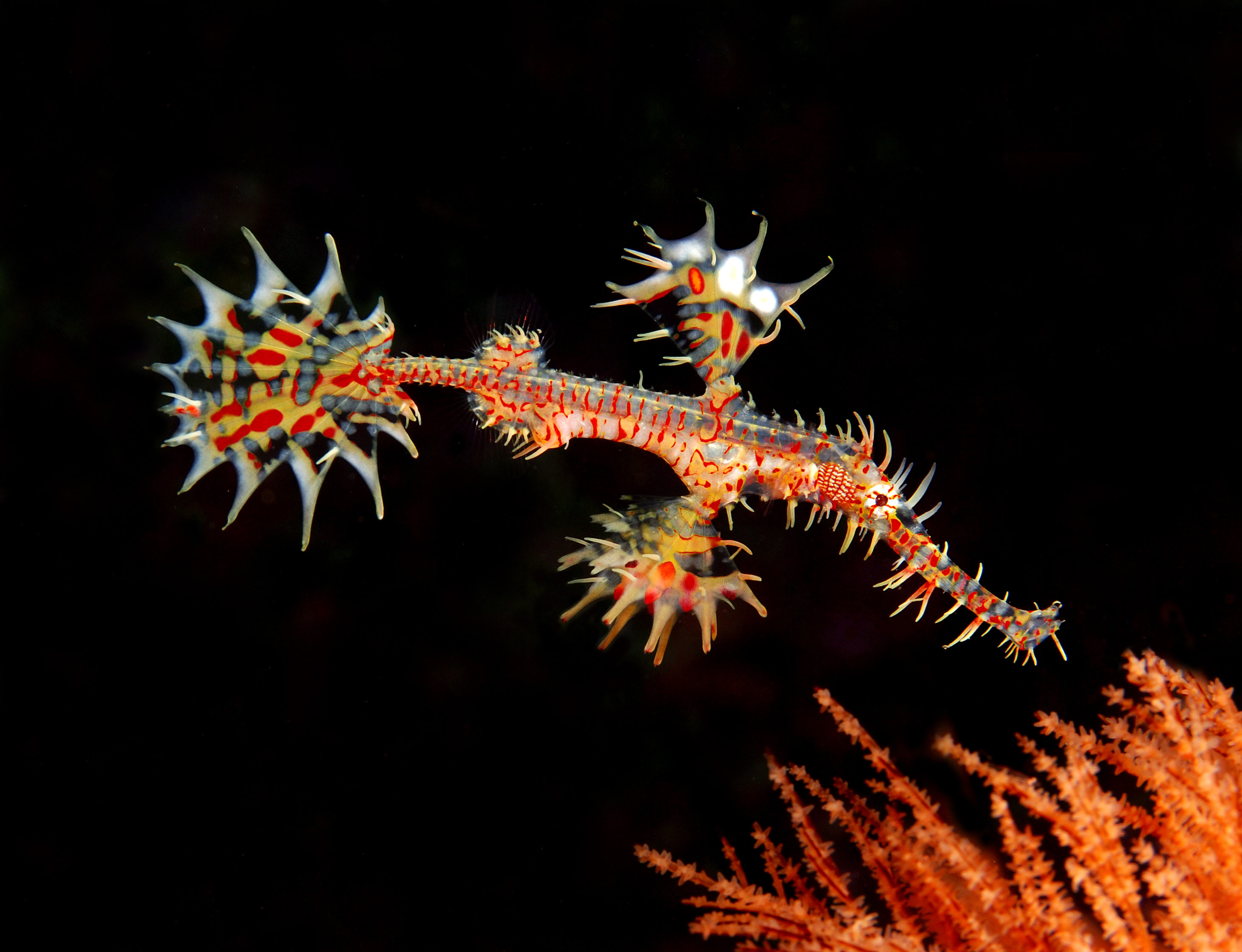 These curious creatures from the 'Pegasidae' family are found lying flat or crawling on sandy or muddy bottoms with flattened bodies, pectoral fins held out to their side, and modified ventral fins for walking. Seamoths feed primarily on tiny crustaceans and other small invertebrates, which they suck in whole with their protusible mouth. Seamoths can change their colour from grey brown to black with flecks to mimic the texture of the substrate. There are two species of seamoths found in NSW waters, the short-bodied little dragon fish Eurypegasus draconis and the more elongated slender seamoth Pegasus volitans. They grow in length up to 8.5 and 14cm respectively. The reproductive strategy of most syngnathiformes is unique in that the female deposits eggs on or in the male's body for incubation and the male then gives birth. Ghostpipefish are an exception as the female retains care of the eggs. Male seahorses and some pipefish have a fully enclosed ventral pouch where they brood eggs. Male seadragons, most pipefish and pipehorses carry their brood of eggs embedded on the underside of their tail or trunk dependent on the species, whereas the female ghostpipefish uses its large ventral fin to form a pouch to brood eggs.

Seahorses give birth to highly developed miniature seahorses, which require no further parental care once born. Newborns of most species range in size from between 7 and 12mm, with up to 200 eggs per brood. Some species of pipefish and pipehorses give birth to active hatchlings and some are able to swim long distances before settling. In contrast, the seamoths broadcast pelagic eggs with the larvae and juveniles then travelling on the ocean currents.

Syngnathiformes are distributed across the world in predominantly tropical, subtropical or warm temperate waters. Off the NSW coast syngnathiformes are found in a variety of habitats ranging from deep reefs to coastal algae, weed or seagrass habitats, or around man made structures such as jetties or mesh nets.

Like most animals, syngnathiformes are found in the habitats where their food resources are plentiful. Often the ends of jetties are rich with seahorses due to water circulation patterns that sometimes present rich patches of zooplankton on which they feed. Seahorses in particular are able to wrap their tails around structures and feed on passing organisms.

Pipefish are present among many reed-like seagrasses where their bodies resemble their environment. Here they are able to employ their sit and wait feeding strategy to attack passing or unsuspecting small crustacean prey. Information on the distribution of a number of species is limited due to the depths they inhabit and because of their highly successful camouflage techniques.

Among the biggest threats to seahorses and their relatives is the loss or alteration of habitat. Many syngnathiformes inhabit relatively shallow inshore areas and sometimes man made structures, which makes them vulnerable to human disturbance. Increasing coastal developments have the potential to impact on habitats such as seagrass, reef and soft bottom habitats through pollution, urban run off, dredging and sewerage. Recreational activities such as boating also have the potential to impact syngnathiform habitat through anchoring in seagrass or seaweed beds. Fortunately in Australia syngnathiformes are not under as much threat as in areas such as the South Pacific where the loss of habitat through the felling of mangrove forests and the destruction of reefs with cyanide and dynamite fishing, combined with widespread over-harvesting, has had drastic impacts on many species.

Due to their interesting appearance, and ease of collection for those with knowledge of their habitat preferences, syngnathiformes (especially seahorses) are often collected for use in home aquariums. Seahorses require particular care in captivity and they usually only consume live food. Without special care many seahorses taken from the wild do not survive for very long. A number of aquaculture organizations have developed techniques for breeding and keeping seahorses, however only a limited number of species are currently available.

Limited quantities of syngnathiformes may be collected for scientific purposes, as aquaculture broodstock or for other specific uses, however this is only be allowed under permit and only once the impacts of any proposed collecting is assessed to ensure the viability of local populations. The new protection afforded by the NSW Fisheries Management Act 1994 will allow better control and monitoring of the collection of these species.

Protection is now afforded to all species of the 'Syngnathidae', 'Solenostomidae' and 'Pegasidae' families, which includes the seahorses, seadragons, pipefish, pipehorses, ghostpipefish and seamoths. It is illegal to catch and keep or possess syngnathiformes, (or any other protected species in NSW) without a permit or licence, and heavy penalties apply. For corporations, these penalties can include fines of up to $55,000 while in other cases they can include fines of up to $11,000 and up to 3 months in prison.

Be careful not to pollute waterways or damage important habitat such as seagrasses.