Over 3,000 items of fishing gear/equipment including:

Note: Section 34J2 offences appear twice as the regulation was changed during the reporting period to require fishers to have the official receipt in their ‘immediate’ possession.

Illegal Abalone Syndicate detected. It will be alleged that a syndicate believed responsible for trafficking illegal abalone worth millions of dollars was detected by a joint NSW DPI and NSW Police operation in February 2011. Two men were arrested on the NSW South Coast and more that 1300 abalone were seized.

Operation Fusion examined the activities of the syndicate since late in 2010, but investigators believe it could have been trafficking illegal abalone worth hundreds of thousands of dollars each year for well over a decade.

Persons found guilty of trafficking abalone face up to 10 years imprisonment. Repeat offenders can also face fines of up to $88000 for each offence detected. Illegal Trapping Raids. During the year over 1000 traps were seized following crackdowns on illegal crab trapping.

A commercial fisher was apprehended with more than 20 commercial fish traps, a grappling device and an illegal (monofilament) meshing net was seized during the operation which targeted unlawful trapping at Port Stephens.

In another raid more than 70 unlawfully set fish and crab traps were seized by fisheries officers during an operation in the Wallis Lake District. A man also faced charges for unlawfully setting fish traps and interfering with set fishing gear. 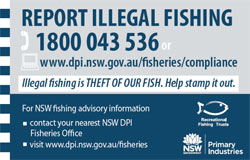 The latter of the two patrol boats the ‘FPV Peter Angel’ was named in honour of the late Peter Angel, a Fisheries Officer of over 40 years service.