Redfin perch, also known as English perch, is a medium sized freshwater fish native to northern Europe. Redfin perch (redfin) were first introduced to Australia in the 1860s for angling, and are now widespread across much of NSW, ACT, Victoria, Tasmania, south-eastern South Australia and the south-western corner of Western Australia.

Redfin are a popular sport fish with some anglers because of their fighting qualities and taste. However, they are also voracious predators of other fish and invertebrates, can destroy recreational fisheries in enclosed waters by building up large numbers of stunted fish and eliminating other species, and can devastate native fish populations by carrying the epizootic haematopoietic necrosis (EHN) virus. For these reasons, redfin are considered a serious pest and in December 2010 redfin were listed as a Class 1 noxious species in NSW.

Description: Redfin belong to the family Percidae. They can be recognised by the following features:

The body colour varies from olive green to grey on the back, fading to greenish or silvery on the sides and whitish on the belly.

Habitat: Redfin live in a wide variety of habitats, but prefer still or slow-flowing waters such as lakes, dams, billabongs, swamps and slower moving streams and rivers. They prefer areas with good shelter such as snags (submerged dead wood and trees), vegetation or rocks, but have also been caught in open water.

Feeding: Redfin perch are carnivorous and feed on a wide variety of foods ranging from small invertebrates (such as crustaceans, worms, molluscs and insect larvae) to fish. They are known to hunt fish either solitarily (by ambushing or stalking their prey) or in organised groups. In groups, they herd shoals of small fish until encircled or pinned against the bank; a few of the redfin then chase into the shoal while the majority hold position and prey on fleeing fish. Schools of redfin also use a similar method known as “beating”, where they flush out insects and small fish from weed beds or other shelter into open water, where they become easy prey for waiting redfin. Such methods give them a reputation as voracious predators.

Reproduction: Redfin spawn in late winter and spring, when they lay several hundred thousand eggs in a gelatinous ribbon amongst aquatic vegetation, submerged logs or other sheltered areas. The egg mass is unpalatable to most other fish and is hence generally protected from predation. The eggs develop and hatch in about a week, and the young fish school to help avoid predation. Redfin usually take 2-6 years to reach sexual maturity, but some have been found to be reproductively mature at 1 year of age.

Redfin are widespread throughout much of NSW and Victoria, particularly the cooler waters on either side of the Great Dividing Range but also into the central parts of each state. They are also known from the ACT, south-eastern South Australia, Tasmania and south-western Western Australia. Their distribution seems to be limited by an upper water temperature of around 31°C and they are rarely found in fast-flowing waters or high altitude areas.

In 2006 NSW Department of Primary Industries (NSW DPI) discovered populations of redfin in the upper part of the Lachlan as well as the Abercrombie and Wollondilly catchments. These areas, which were previously free of redfin, support some of the last known NSW populations of threatened native Macquarie perch and southern pygmy perch. In 2008 redfin were confirmed in two new locations - in Wyangala Dam in the Lachlan catchment and Oberon Dam in the Macquarie catchment.

In early 2010 NSW DPI acted quickly on a report of redfin in a farm dam in the upper Hawkesbury-Nepean catchment, upstream from Coxs River and Lake Wallace. Redfin had not been recorded in the area previously and this sighting was considered to be a significant threat to Macquarie perch which is known to inhabit the Coxs River while Lake Wallace is an important recreational impoundment for trout and bass.

NSW DPI with the assistance of local recreational fishing groups drained the dam to eradicate the redfin. The majority of the redfin were dispatched while some were collected from the dam and transferred live to Sydney University for research purposes. Nearby locations were subsequently surveyed for redfin in mid 2010, and none were found. 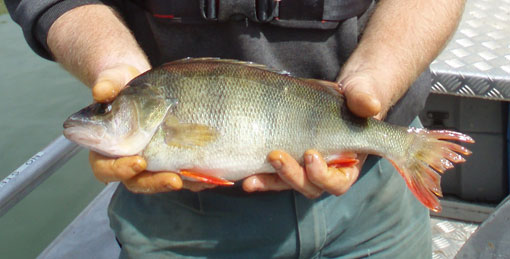 Known and probable distribution of redfin perch in NSW as at May 2011.

Redfin were first introduced to Australia in the 1860s for angling. The recently discovered populations of redfin in the upper Hawkesbury-Nepean, Lachlan, Abercrombie and Wollondilly catchments appear to have been introduced deliberately, as they are geographically isolated from existing populations and could not have spread naturally.

Even though redfin have been in Australia for over 100 years, much of the information regarding their impacts is based on personal observations rather than scientific studies. Redfin are voracious predators which consume a wide variety of fish and invertebrates, including small native species such as pygmy perch, rainbowfish and carp gudgeon, and the eggs and fry of larger fish such as silver perch, golden perch, Murray cod and introduced trout.

This predation can seriously impact populations of native species and trout, and hence can also affect recreational fisheries for these species. For example, redfin were recorded as eliminating 20,000 newly released rainbow trout fry from a reservoir in south-western Australia in less than 72 hours. Redfin are capable of rapidly populating new waterways and in stable water bodies (such as lakes and dams) they can form very dense populations. Under these conditions, redfin become stunted as they deplete the food supply, becoming worthless for angling.

In such large numbers, they can also out-compete most other fish species. One of the most significant threats to native fish from redfin is their potential to spread the viral disease Epizootic Haematopoietic Necrosis (EHN). This disease, which was first isolated in 1985 and is unique to Australia, can cause mass mortality in juvenile redfin perch during the summer months.

A number of native species, including silver perch, Murray cod, mountain galaxias and particularly Macquarie perch, are highly susceptible to the disease, and EHN virus may be one factor responsible for the decline in various native species over the last couple of decades.

In December 2010, NSW DPI listed redfin perch as a Class 1 noxious fish species. This listing recognises the threat that this species causes to native fish populations, and prohibits live possession and sale of the species. For more information on the noxious listing of redfin click on the link below.

NSW DPI has an ongoing survey program throughout NSW to gather information on the distribution of freshwater fish species, including introduced pest fish such as redfin. The department has undertaken specific surveys to confirm the presence and abundance of redfin in new areas.

NSW DPI has considered a range of options for targeted control and/or containment of redfin to limit the impacts on threatened species. However, as with all pest fish in open waterways, it currently appears to be impossible to eradicate redfin populations or prevent natural dispersal to new areas.

Southern pygmy perch broodstock have been collected from one site under threat from redfin and will be used to form the basis of a conservation stocking program for re-introduction into sites with suitable habitat.

NSW DPI, together with Sydney University, is investigating the EHN virus carried by redfin and its impacts on native species. This project aims to assist management in several ways including determining the extent of EHN distribution in the Murray-Darling Basin, developing tests to detect presence of EHN antibodies in native fish, assisting the selection of EHN resistant broodstock for conservation stocking activities and informing the development of EHN containment policies.

The former Hawkesbury-Nepean Catchment Management Authority funded a NSW DPI project to look at options for excluding redfin from Macquarie perch habitats in that catchment, in response to new redfin populations in the Wollondilly River.

This project recommended that a velocity barrier be constructed on the Kedumba River to prevent the spread of redfin into this catchment and also highlighted the need for further research into the effectiveness of other exclusion devices.

During 2010/11 NSW DPI is undertaking research (funded by the Murray Darling Basin Authority) to identify and trial various control techniques for redfin perch and assess the species behaviour using tagging. This project will draw from an international body of knowledge and experience on redfin to identify weaknesses in the species biology that could be exploited to control populations in NSW.

Field trials will be conducted in several locations on the Central Tablelands to assess the effectiveness of particular control techniques. Results of this project will be considered as part of the development of recommendations for a long term control programme for the species.

The Recreational Freshwater Fishing Trust has provided support for NSW DPI to conduct a follow up survey of the upper Coxs catchment to detect the presence of redfin and determine whether further spread of the species was prevented following eradication of a population from a farm dam in the catchment in early 2010.

NSW DPI has completed an awareness raising campaign to alert anglers to the problems this fish can cause. The campaign has involved producing an educational poster (“Say no to feral fish: redfin perch”) which was sent to all NSW fishing licence agents and recreational fishing clubs throughout NSW. This poster was updated in early 2010 and sent to NSW fishing licence agents and Fisheries Offices in inland areas.